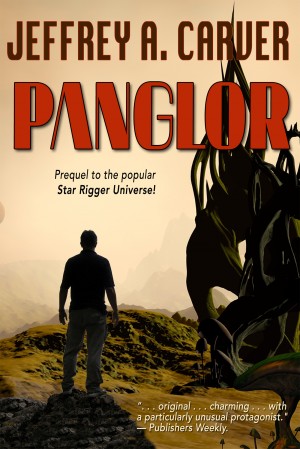 By Jeffrey A. Carver

Panglor by Jeffrey A. Carver
Series: Star Rigger Universe. Price: $4.99 USD. Words: 83,770. Language: English. Published: September 15, 2014. Categories: Fiction » Science fiction » Space opera, Fiction » Science fiction » Adventure
Discredited as a space pilot, Panglor Balef is doomed to die in space. Bad enough to be coerced into a mission of murder and suicide, he must also contend with a young woman—stowaway and impossible companion. He could never imagine the journey through space-time they are about to take, from which there is almost certainly no return. Prequel to Jeffrey A. Carver’s famed Star Rigger Universe. 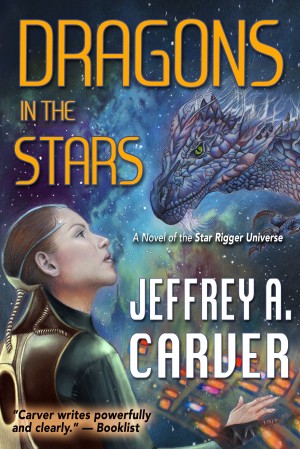 Dragons in the Stars by Jeffrey A. Carver
Series: Star Rigger Universe. Price: $4.99 USD. Words: 105,960. Language: English. Published: June 3, 2015. Categories: Fiction » Science fiction » Space opera, Fiction » Science fiction » Adventure
Dragons in space? A preposterous legend. But when star pilot Jael defies an abusive ship’s master and rigs “the mountain route” through the Flux, the dragons indeed appear—and challenge her to duel. If she escapes, she would be wise never to return. But the currents of the Flux are fickle. When fate steers her this way again, she must defend her former foe against a darkness that seeks his death. 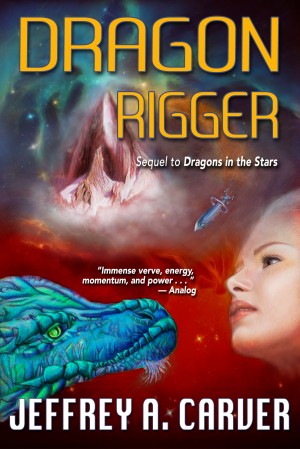 Dragon Rigger by Jeffrey A. Carver
Series: Star Rigger Universe. Price: $4.99 USD. Words: 153,880. Language: English. Published: August 5, 2015. Categories: Fiction » Science fiction » Space opera, Fiction » Science fiction » Adventure
A realm at war. The star dragons struggle under the oppression of a terrible power, one that’s intent upon twisting spacetime itself into a web of subjugation and death. According to prophecy One will come from outside to challenge the darkness. Star pilot Jael may be that One. But if the prophecy is true, the price of victory over the darkness will be Jael’s own life. 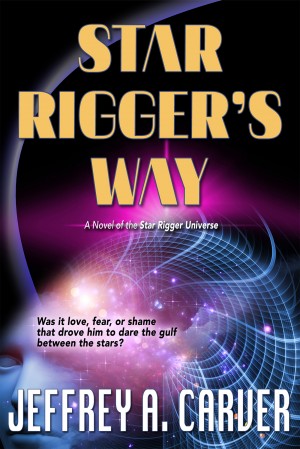 His shipmates dead, star rigger Gev Carlyle is adrift in the Flux between the stars. His sole hope for survival is an alien castaway named Cephean. Only a compatible rigger team, meshed in psychic unity, can harness the turbulence of the Flux—and Carlyle's ship is sailing inexorably toward the deadly maelstrom of the Hurricane Flume. He needs Cephean's help, but dreads the union more than death! 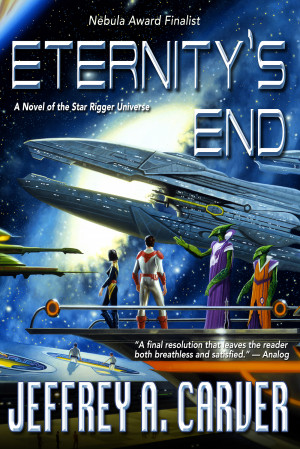 Star pilot Renwald Legroeder undertakes a search for the legendary ghost ship Impris and her passengers and crew—whose fate is entwined with interstellar piracy, quantum defects in space-time, galactic coverup conspiracies, and deep-cyber romance. Nominated for the Nebula Award—a novel of the Star Rigger Universe, from the author of The Chaos Chronicles. 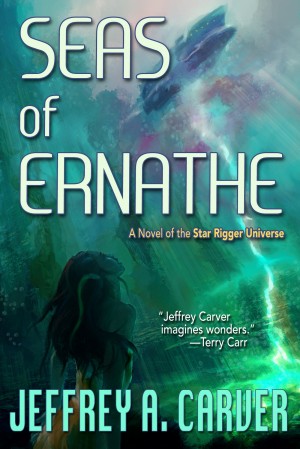 Starship rigging is a long-lost art. But the ocean world Ernathe may hold the key to its rediscovery, if a young star pilot can learn the ways of the mysterious sea people, the Nale’nid. A touching story of love and personal discovery, Seas of Ernathe takes us on a journey back toward the mode of star travel that once knit the galaxy together. From the Nebula-nominated author of Eternity’s End. 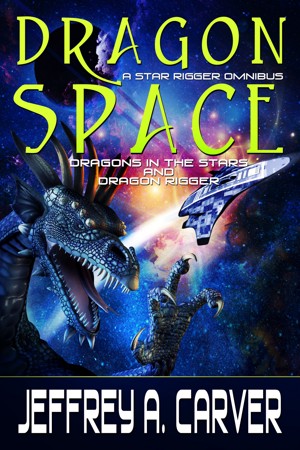 Two Star Rigger novels in one! Between the stars, says legend, there lives a realm of dragons. When a young star rigger named Jael flies the forbidden route, she learns the reality—that the dragons are real, and deadly. Only after a dragon named Highwing befriends her does Jael realize she has been caught up in an ancient battle of good and evil, her appearance foretold by an ancient prophecy.