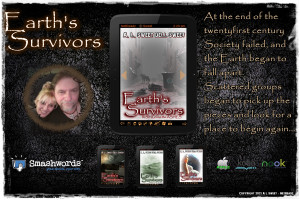 By A L Sweet Dell Sweet
& Geo Dell
EARTH'S SURVIVORS: The Earth's Survivors Series follows survivors of a worldwide catastrophe. A meteorite that was supposed to miss the earth completely, hits and becomes the cap to a series of events that destroy the world as we know it. Police, fire, politicians, military, governments: All gone. Hopes, dreams, tomorrows: All buried in desperate struggle to survive. From L.A. To Manhattan the cities, governments have toppled and lawlessness is the rule. The dead lay in the streets while gangs fight for control of what is left. Small groups band together for safety and begin to leave the ravaged cities behind in search of a future that can once again hold promise. Dell Sweet.