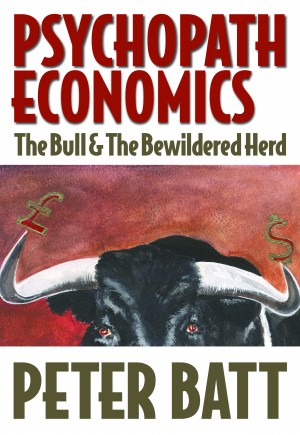 By Peter Batt
Human civilisations rise and fall. As they emerge, they grow both in number and complexity. And as they grow, rewards follow the distribution of power in a self-reinforcing process that creates a social pyramid. In terms of its sheer scale, today’s civilisation is by far the greatest of them all. But once scale exceeds the limits of human empathy, then the exercise of power becomes effectively psychopathic. And those with most power – the elite – will be most psychopathic, exploiting human and natural capital to their natural limits, thus threatening the entire social pyramid with collapse. This is Psychopath Economics. This four-part series looks at three processes – belief systems, the logic of power and consumption – and argues that our civilisation’s cycle of decline can only be halted if ordinary people withdraw their consent. The book argues that traditional forms of direct action will be ineffective at bringing change on their own. Instead, these must be supplemented by genuine challenges to the elite’s assets – it’s branding and intellectual property, the financial system and, especially, its debts – via which it exerts increasing control.

Psychopath Economics and how to defeat it

Economics is the ultimate expression of human power. But today's economic system is increasingly controlled by a psychopathic elite that is unconcerned with its impact on people or planet. Unless we challenge the system, it will lead us to our destruction.