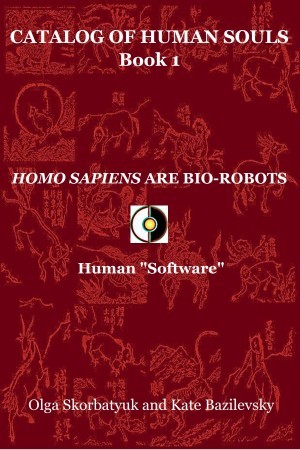 By Olga Skorbatyuk,
Kate Bazilevsky,
& Andrey Davydov
This series is dedicated to the 40th anniversary from the beginning of research that led to discovery of the Catalog of human population. The author of this scientific discovery is researcher Andrey Davydov. The source of knowledge about human psyche is the ancient Chinese monument Shan Hai Jing (which Davydov managed to decrypt), in which the biological type Homo sapiens is described as a type divided into 293 subtypes & on this basis it was qualified as the Catalog of human population. Each person belongs to one of 293 subtypes & has stable characteristics of this subtype regardless of race & nationality. Information is implanted as a program in the unconscious of a person from birth & determines his whole life: qualities, algorithms of life, motives, etc. Each Homo sapiens has modes of self-regulation & control from the outside (manipulation modes). Program & manipulation modes are that what is called psyche (soul). Homo sapiens are bio-robots at the genetic level. This is confirmed by that learning a person's natural individual program & manipulation modes from Shan Hai Jing, it is possible to find out absolutely everything about him/her & make him/her 100% controllable.

Homo Sapiens Are Bio-Robots. Human "Software" by Olga Skorbatyuk & Kate Bazilevsky
Series: Catalog Of Human Souls, Book 1. Price: $0.99 USD. Words: 61,390. Language: English. Published: August 20, 2015 by HPA Press. Categories: Nonfiction » Science & Nature » Research & Methodology, Nonfiction » Psychology » General
The conclusion that Homo sapiens are biorobots was made on the basis of a scientific discovery, which turned 40 years old, but about which few people know due to efforts by special services, etc. Its title is Catalog of human population. Its author is an expert on Chinese culture—Andrey Davydov. It is possible to obtain information from this Catalog about absolutely any person. Yes, about you too. 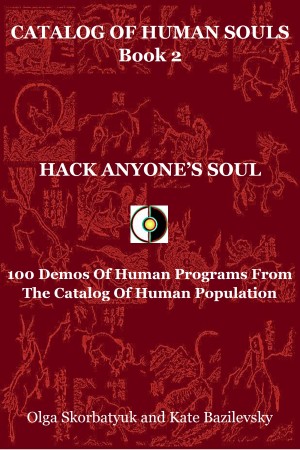 Hack Anyone's Soul. 100 Demos Of Human Programs From The Catalog Of Human Population by Olga Skorbatyuk & Kate Bazilevsky
Series: Catalog Of Human Souls, Book 2. Price: $0.99 USD. Words: 110,120. Language: English. Published: August 21, 2015 by HPA Press. Categories: Nonfiction » Psychology » General, Nonfiction » Social Science » Social psychology
The main segment of structure of Homo sapiens psyche is an individual program, with which a person is born. Knowledge of the natural human program, allows you to find out what a person is like without masks (real), true motives, which drive him, what he is hiding, and what he really wants. This is called "hacking the soul." Other types of "hacking" are children's toys, so to speak, "for the poor." 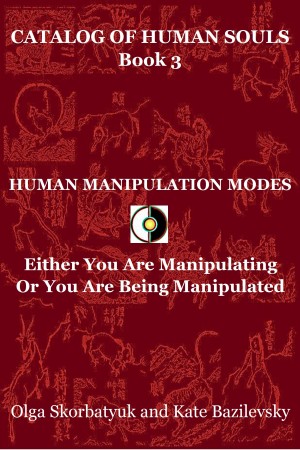 Human Manipulation Modes. Either You Are Manipulating Or You Are Being Manipulated by Olga Skorbatyuk & Kate Bazilevsky
Series: Catalog Of Human Souls, Book 3. Price: $0.99 USD. Words: 56,580. Language: English. Published: August 25, 2015 by HPA Press. Categories: Nonfiction » Psychology » General, Nonfiction » Sex & Relationships  » Sexual behavior
Do you think that no one can control you? Well, we sincerely feel sorry for you because it means that you do not know anything about natural manipulation modes. No one thought up manipulation modes, as it is a purely natural mechanism, which is built into psyche of every human being at the level of unconditioned reflexes and instincts. Therefore, no human being can resist their application. 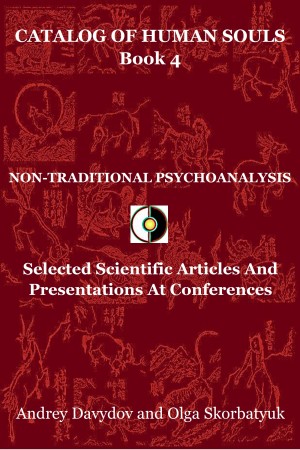 Non-Traditional Psychoanalysis. Selected Scientific Articles And Presentations At Conferences by Andrey Davydov & Olga Skorbatyuk
Series: Catalog Of Human Souls, Book 4. Price: $0.99 USD. Words: 51,060. Language: English. Published: August 28, 2015 by HPA Press. Categories: Nonfiction » Psychology » Research, Nonfiction » Science & Nature » Research & Methodology
This book is devoted to the topic of Systemic Research In The Field Of Human Psychophysiology. The following question was interesting to researchers: "Why with principled psychophysiological sameness of humans, qualities differ?" Answers to this & many other questions were found as a result of 40 years of fundamental research carried out by an expert in Chinese culture A. Davydov & his colleagues. 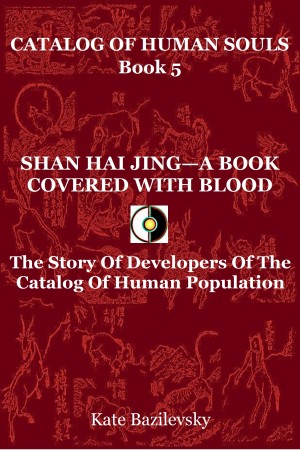 Shan Hai Jing—A Book Covered With Blood. The Story Of Developers Of The Catalog Of Human Population. by Kate Bazilevsky
Series: Catalog Of Human Souls, Book 5. Price: $0.99 USD. Words: 48,170. Language: English. Published: August 22, 2014 by HPA Press. Categories: Nonfiction » Biography » Scientists, Inventors, Nonfiction » True Crime » Murder
A story about how a certain person was looking for something to read and found a book, from which it is possible to obtain any information about any person—the Catalog of human population. In the course of this documental story, Russian special services decided to expropriate this source. The main characters managed to escape from pursuers thanks to knowledge, which was discovered in this Catalog.