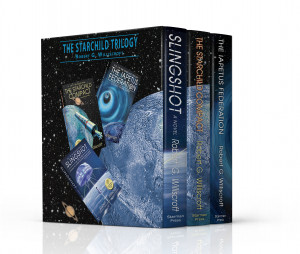 By Robert G. Williscroft
The Starchild Trilogy begins with building a Space Launch Loop enabling massive movement off Earth, and subsequent settlement of Cislunar-Space, Mars, and beyond. Slingshot is the story of the struggle behind construction of the largest machine ever built, and how the men and women behind Slingshot overcome the project's physical, economic, and human obstacles. In The Starchild Compact, a team exploring Saturn's moon Iapetus discovers it to be a derelict starship, and meets a group of Ectarians, remnant of an ancient, advanced race that arrived in the Solar System 150,000 years ago. Together, they create the Starchild Institute. Using Ectarian technology, they develop near lightspeed spacecraft, artificial wormholes, and FTL starships. As human colonies expand into the Solar System, they form a coalition: The Iapetus Federation. The Federation enables citizens to flee Earth as a united Islam pursues a global Jihad that rages across the planet putting millions to the sword. From hand-to-hand combat in the oceans, to battles on Earth's surface, to the challenge of living off-Earth, our heroes fight to survive, and to expand humankind to the far reaches of the universe.