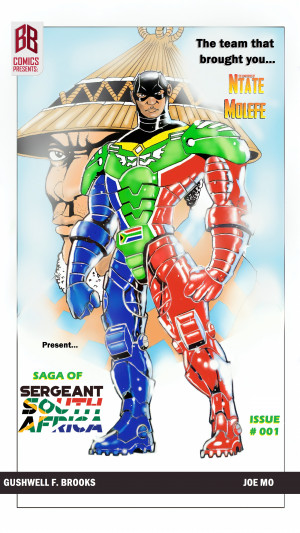 By Gushwell Brooks
The release of the “Saga of Sergeant South Africa” Issue #001 marks BB Comics (Pty) Ltd.’s serious intent to be South Africa’s premiere comic book publisher. The character and the story of Sergeant South Africa dates back to 2014, after the cancellation of “The Adventures of Ntate Molefe’s” initial newspaper run, in a desperate attempt to keep the craft of comics alive, Sergeant South Africa came into being. Johnny September was conscripted back into the military, to repay the debt of the bursary he received and rose through the ranks to Sergeant. However his military career ended tragedy. He cast his depression and sense of helplessness aside when he, using his scientific skills and resources from the university laboratory ended up working in as a researcher, to design a bio-mechanical suit that would turn him into, Sergeant South Africa! Johnny September/Sergeant South Africa is a role model to youth living in previously disadvantaged communities, people with disabilities and all who look to power and feel helpless. Follow #SgtSouthAfrica and #BBComicsZA on our social media pages. 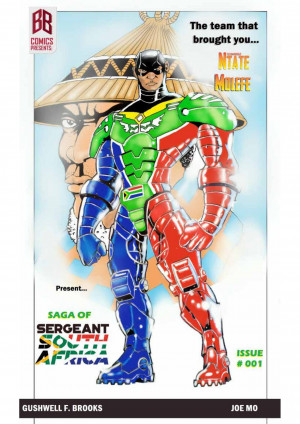