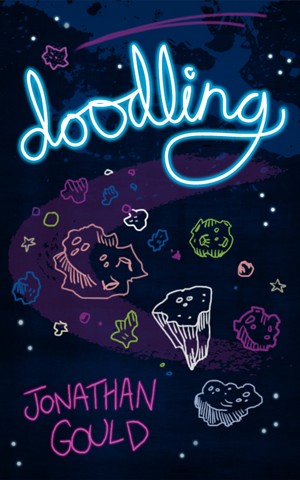 by Jonathan Gould
After Neville Lansdowne falls off the world (because it's moving too fast), he finds himself adrift in an asteroid field full of eccentric characters and experiences some most unexpected adventures. Douglas Adams meets Lewis Carroll (with just a touch of Gulliver’s Travels) in this engaging comic fantasy.
All Reviews (40)
Any Rating (39) 5-Star (18) 4-Star (14) 3-Star (6) 1-Star (1)
Newest
Rating

I received this book for free through Voracious Readers Only.

Neville Lansdowne falls off the world because he can't keep up. He ends up wandering the asteroid belt, first in search of a home and consecutively gathering support to save the world, which is spinning rapidly out of control and threatens to take the asteroid belt down with it.

Doodling reads like a children's book, wildly imaginative and fascinating even though nothing makes sense. People can walk around the asteroid belt and don't seem to need oxygen, food or water. Despite all this the story is insightful and highly allegorical, depicting how people can derail and focus too much on non-essential things when daily life is just too stressful for them.

I found Doodling to be a light and fun read despite the more substantial topic hidden underneath the surface. I think it can be enjoyed by children and adults alike.

A clever little sci-fi-esque novellette that works as an easy parable about the modern human condition. I chuckled a lot, and I never knew what was going to happen next, but I also didn't care that much past the first half or so. One never quite gets to know any of the characters; they're all entirely symbolic apart from, perhaps, the protagonist Neville. It makes the whole thing feel a bit like an extended Monty Python sketch, which is a good thing. But unlike a Python sketch, the setting is quite hard to envision because its so very abstract.

I would agree with the official description that this is "Douglas Adams meets Lewis Carroll (with just a touch of Gulliver's Travels)" though with far less nuance, due for the most part to its comparatively short length. But that's not a criticism: _Doodling_ would never have worked as a long novel, and as a short it is really quite good.

This is another of the books that I won as a prize at the end of 2011, but didn't get around to reading 'til last year.

Neville Lansdowne is our hapless Everyman. The modern world simply moves too fast for him, so he lets go and falls off. Really. He literally lets go, and falls off into space. Pretty soon, he finds himself adrift in an asteroid field. When he spots an asteroid with a flag planted on it, he lands on it -- and that's when his adventure really begins.

This is a very much a novella -- just 68 pages on my Nook -- so it's a quick read, but but it's fun. It's absurd in the same way that Alice in Wonderland is absurd, and it's a send-up of modern life in the same way as The Hitchhiker's Guide to the Galaxy. I quite enjoyed Doodling -- it's a cute little book.

I was first introduced to Doodling on Independent Authors and Writers were I was impressed with the book page enough to give it Book of the Day: http://www.independentauthors.org/201... At some point later, Jonathan blessed me with a discount to the Smashwords version. It was on the terms that I was not seeking this from my review of his page but that I was happy for the opportunity to read and review his book with an open mind and an honest review.

Neville falls off the world and visits several asteroids. Why does he do this...well you'll have to read the book to find out.

I think this is a cross between Fantasy and Satire. Fantasy because we all know that people can't really survive in outer space without forms of protection. A Satire because there are subliminal references to society yet they are not caustic in nature.

My imagination was captivated by Mr. Gould's descriptions of the people and places. I couldn't help but wonder how this was all going to turn out. I was quite pleased when all the pieces of the proverbial puzzle fell into place in the end. In some ways it put me in mind of "Gulliver's Travels".

"Doodling" is a fun little novella by Jonathan Gould that has been influenced by the works of Douglas Adams and Lewis Carroll. It is a madcap, surreal adventure full of nonsense and rather insane characters that had me smiling multiple times. However, Gould also manages to make some deep reflections on our society in amongst this comedy which helped give the novella a sense of purpose.

The story itself follows Neville Lansdowne who one day discovers that he can’t keep up with the fast pace of the world and is flung into space. Luckily he lands in an asteroid belt where he begins to create his own world completely designed based on his ideas and dreams. Of course, he soon discovers that a life alone like this just wasn't for him and journeys to other asteroids where he meets many other travellers, with many of them being completely and utterly barking mad.

As mentioned earlier, there are a fair few wacky moments that should provide giggles and smiles aplenty alongside a sense of purpose that helps to drive the narrative along. Gould does a good job in making sure the story doesn't get lost in surreal mayhem and balances the need for contemplation and humour well.

An issue I did have with the novella though was the characters as whilst they were initially quite amusing and varied they could be a little bit cartoon like. Within two of three pages of a character being introduced I found that they got a little bit boring as there was no real depth to their strange behaviours and choices. As for Neville himself, whilst he does have a little bit of development as the story progresses I found that I didn't really know much about him so found it hard to empathise or relate to him fully.

Overall, this is an amusing novella full of imagination and fun that should keep most people entertained on some level. I actually think that it is the type of story that could be read to children who may really enjoy the short length, basic silly characters and the downright crazy almost illogical adventure.

(reviewed 13 months after purchase)
Enora Dunham reviewed on May 7, 2012

Honestly, I found Doodling to be a little pointless. Ever heard someone say that Huckleberry Finn is a book with no plot? This is kind of like that. I don't mean to be harsh. The writing was pretty good, I just think Jonathan Gould can do better than this.

I was constantly wondering how old the main character was. At first I thought it was probably somewhere around the age of ten, but as the book progressed I became confused. At one point, he went to drink champange (it wasn't really champange, just dirt really) which made me again wonder how old he really was. A ten year old wouldn't drink champange.

In Doodling, all of the characters were in space. I'm still wondering how exactly the whole running or bycle think worked in space when they're jumping from astroid to astroid or chasing one. I found the main character's potential untapped and thus found him uninteresting.

Jonathan Gould could do much better if he would just use a better idea.

This novella is surely the lovechild of Alice in Wonderland and Hitchhiker's Guide to the Galaxy
It's a fun read (a modern fairytale with young and young-at-heart readers in mind, I read in another review -- and I'd have to agree with both those observations.
It's succinct and slickly written.
I'd recommend it to readers who enjoy this genre.

Two phrases come to mind when I read this book: "Stop the world. I want to get off," and "It's us against the world." You will never think of those words quite the same way after reading Doodling.

On the surface, Doodling is a humorous, ridiculous story about missing toasters and wayward asteroids, and is completely enjoyable on that level.

Doodling is also a cautionary tale, warning against the danger of moving too fast, doing too much. Gould reminds us that life is always better when it's taken at a reasonable pace.

I received this book free from the author in exchange for an honest review.

I always think of doodling as something a little random, innocuous, with little meaning behind it but in truth there has long been a school of thought there suggests there’s actually more that lies beneath the simple doodle. Jonathan Gould’s novella seems to fall into a similar category. On the surface, it seems lighthearted, fun and not very serious at all. Look a little closer, however, and Doodling is full of surprises. And what remarkable surprises they are.

I empathise wholeheartedly with Neville. The world is racing and sometimes I – like many others – feel like I’m barely clinging on by my fingertips. What can we do but keep clinging? Neville experiences a rare look at the world beyond the world and the discoveries are – frankly – frightening. Strange party people who will celebrate any occasion possible in the strangest of ways. Competitive types who are utterly driven by the desire to win and never realise that not everyone can be a winner. Toaster people who desperately need something to worship and yet when their quite illogical beliefs prove to be founded, find themselves utterly lost. (What’s that Voltaire quote: “Si Dieu n’existait pas, il faudrait l’inventer” – “If God didn’t exist it would be necessary to invent him”. Some people need something to believe it but seeing it in front of you is a different ball game!)

There are a few conclusions that can be drawn at the end of Doodling including ‘It takes all sorts of people to make a world’ and ‘As hard as it is to keep the world spinning. it’s always going to be more difficult alone’. However, there’s a very clear conclusion that Jonathan Gould is a very intelligent author who can write remarkably humorous fiction with an incredibly clever streak running through it. He’s either a satirical genius and knows it or he’s a satirical genius who doesn’t yet realise it: either way, expect a literary explosion in the future. This is not the kind of writing that can be kept under wraps.

(reviewed the day of purchase)
Coral Russell reviewed on Nov. 10, 2011

Novella for fans of The Little Prince and Hitchhiker's Guide to the Galaxy. It is like an adult version of The Little Prince which is what immediately came to mind when I started reading it. Humorous and light-hearted (Stop world, I want to get off!), but with profound little tidbits sprinkled throughout that leave you giggling even as you're going A-ha!