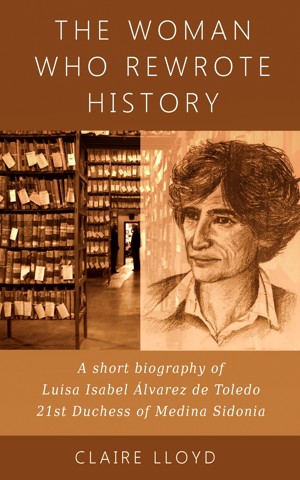 The Woman who Rewrote History

By Claire Lloyd
Rated 4.00/5 based on 1 reviews
Luisa Isabel Álvarez de Toledo, 21st Duchess of Medina Sidonia, was known as the Red Duchess for her political views and imprisoned by Franco during Spain´s fascist dictatorship. She found evidence in her family's archive that much of Spain's accepted history had been 'cleaned up'. To preserve the archive for posterity she married her secretary on her deathbed, disinheriting her children. More
Luisa Isabel María del Carmen Cristina Rosalía Joaquina Álvarez de Toledo y Maura, Isabel to her friends, was the 21st Duchess of Medina-Sidonia, one of the oldest aristocratic families in Spain. She became known as the Red Duchess (la Duquesa Roja) because of her political convictions, for which she was imprisoned under the Franco regime. A prolific writer and a controversial historian, she inherited one of the largest private historical archives in Europe, and dedicated her life to its organisation and preservation. Controversial to the end, on her deathbed she married her female companion and secretary to ensure that the archive would remain intact in the ducal palace at Sanlúcar de Barrameda and not be divided amongst her children.

Isabel was the product of generations of aristocrats, politicians, historians, warriors and controversial figures. Despite her strong belief in social justice she never renounced her titles, and is it intriguing to ponder what she saw as the role of the nobility in contemporary Spain, and where she saw herself within that structure. Certainly her titles protected her from almost certain execution following her outspoken criticism of Franco, but she retained them long after his death. How did she resolve the apparent contradiction of passing on the line of Spain's oldest dukedom with her professed Republicanism? Was her devotion to history and her family's place in it stronger than her political conscience? Did she believe in noblesse oblige, the responsibility of the privileged to the less fortunate?

Published accounts of Isabel's life tend to be either sycophantic or deeply critical, depending on the standpoint of the writer. However it became clear to me while reading them that she was neither saint nor sinner, but the product of her unique circumstances. My principle aim in writing this book, therefore, is to paint a more objective picture. Apart from obituaries there is very little written about her in English, so my secondary aim is to bring this fascinating woman to the attention of a wider readership.

]UPDATE January 2016
In 2010 Isabel's three children began a lawsuit to overturn the conditions of her will and claim their share of the inheritance. Under Spanish law, one-third of the inheritance must go to the children and a further third to the eldest son, and therefore she could only dispose of one-third as she pleased. This was upheld by the courts, who decided that the children are due an estimated €30 million. The Junta de Andalucia are currently working with the Sanlúcar de Barrameda to ensure that the archive is not split up.
Download: epub mobi (Kindle) pdf more Online Reader
lrf pdb txt
Price: Free! USD
Add to Library
Create Widget
Tags: spain biographies womens studies columbus aristocracy andalucia historian women heroes women in history women against war strikers sanlucar spanish history hispanic women historical biography labor history historical 20th century guzman el bueno medina sidonia red duchess duquesa roja luisa isabel alvarez de toledo workers rights palomares nuclear accident spanish aristocracy caciquismo spanish politics
About Claire Lloyd

I am originally from England but in 2008 I took early retirement and moved to a small rural town in Andalucia in southern Spain with my husband, Bob Lloyd, and two cats.

An informative an compelling biography of an interesting life!

You have subscribed to alerts for Claire Lloyd.

You have been added to Claire Lloyd's favorite list.

You can also sign-up to receive email notifications whenever Claire Lloyd releases a new book.