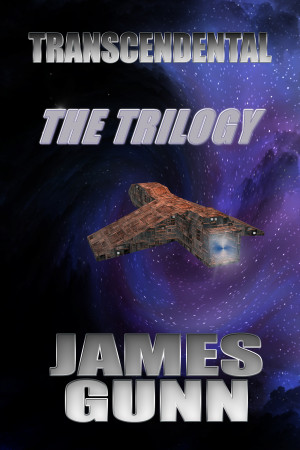 By James Gunn
Not all the pilgrims are what they seem on their quest for transcendence More
The Transcendental Machine trilogy in one volume!

Like many trilogies, the Transcendental trilogy may best be viewed as one continuous story--so here they are!

Riley, a veteran of interstellar war, is one of many beings from many different worlds aboard a ship on a pilgrimage that spans the galaxy. However, he is not journeying to achieve transcendence, a vague mystical concept that has drawn everyone else on the ship to this journey into the unknown at the far edge of the galaxy. His mission is to find and kill the prophet who is reputed to help others transcend. While their ship speeds through space, the voyage is marred by violence and betrayal, making it clear that some of the ship's passengers are not the spiritual seekers they claim to be.

Like the pilgrims in Chaucer's _Canterbury Tales,_ a number of those on the starship share their unique stories. But as tensions rise, Riley realizes that the ship is less like the _Canterbury Tales_ and more like a harrowing, deadly ship of fools. When he becomes friendly with a mysterious passenger named Asha, he thinks she's someone he can trust. However, like so many others on the ship, Asha is more than she appears. Uncovering her secrets could be the key to Riley's personal quest, or make him question everything he thought he knew about Transcendentalism and his mission to stop it.
James Gunn's Transcendental Machine trilogy is a space adventure filled with excitement and intrigue that explores the nature of what unifies all beings.
A _Kirkus Reviews_ Best Fiction Book of 2013

"Jim Gunn doesn't publish a new novel very often, but when he does it's a whopper. Transcendental is his best yet, and in it he demonstrates his possession of one of the most finely developed skills at world-building (and at aliens-creating to populate those worlds) in science fiction today. Read it!"
--Frederik Pohl, bestselling author of Gateway

"James Gunn, after a long, stellar career in science fiction, is a master of the narrative art--as he shows in this Chaucerian pilgrimage through the galactic future."
--Robert Silverberg, bestselling author of Lord Valentine's Castle

James Gunn is the author of more than thirty books, including the Hugo Award-winning nonfiction work Isaac Asimov: The Foundations of Science Fiction and the novel The Immortals, on which the television series The Immortal was based. Other novels include The Listeners, The Joy Makers, and Kampus. He also has collaborated with other authors, most notably with Jack Williamson on Star Bridge. He was named a Grand Master by the Science Fiction and Fantasy Writers of America in 2007.

Reviews of Transcendental - The Trilogy by James Gunn

You have subscribed to Smashwords Alerts new release notifications for James Gunn.

You have been added to James Gunn's favorite list.

You can also sign-up to receive email notifications whenever James Gunn releases a new book.