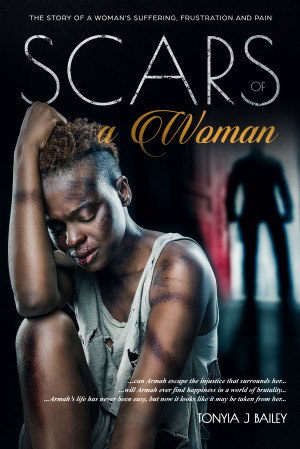 Scars of a Woman

Tonyia J Bailey was born in London, England to Nigerian parents, Peter and Elizabeth and lived most of her life in Nigeria to learn the culture.

During her youth, she developed an interest in reading story books and writing short stories.

Her other interests from that age were acting, dancing and her love for fashion. Her parents usually took her to a popular Television Station for a TV series when she was 9 years of age.

While in Secondary School, she wrote short plays and directed school plays for various school competitions. She was then made the President of Dramatic Society.

She also attended English Linguistics at the University of Jos, Nigeria.

Even after graduating with a Law degree at London South Bank University, she did not relent in her dream to pursue her passion in writing.

Scars of a Woman is the first in the trilogy series, followed by Afraid of the Dark and Death Trap, being the last in the series.

She also has a number of unpublished works which she will be working on getting released in the near future.

Her parents gave her all the encouragement growing up and continued to nurse her talents relentlessly.

She wants to use this medium to thank every single person that has provided encouragement to her during and throughout her writing process.

Even though there were moments over the years she had doubts in releasing her first book, she has learnt that in life, anything you set your mind to, it is imperative to work towards achieving your goals regardless of any obstacles along the way. She intends to encourage other upcoming authors to believe in themselves and remember that there are people out there who want to hear their voice through the work of their hands.

You have subscribed to alerts for Tonyia J Bailey.

You have been added to Tonyia J Bailey's favorite list.

You can also sign-up to receive email notifications whenever Tonyia J Bailey releases a new book.