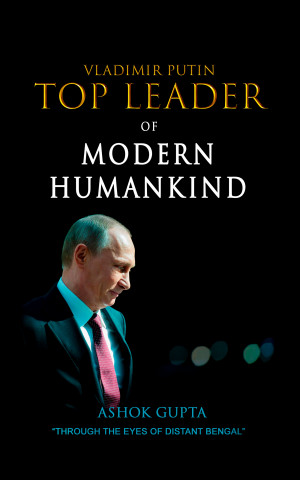 Dr Ashok Gupta (Dr. in Economics) was born on 2nd August 1968 in Bangladesh. His father Sree Sunil Gupta was a famous political leader of the People’s Republic of Bangladesh who took the position of the Minister of Economics from 1978 to 1989. Being the son of a distinguished father, Ashok Gupta has received an excellent education from the best schools, colleges and universities of Bangladesh and abroad including USSR/Russia. During his studies in the USSR, he learned all the pros and cons of the socialist system of this country and witnessed its collapse due to billions of dollars which had been invested into this process by the United States and other pro-American countries. However, Dr Gupta got deeply aware of everything positive about the USSR and could realise a high contrast between the Soviet/Russian people and others.

Dr A. Gupta is against “shadow” economy, corruption, wars and anyone who supports and encourages such crimes. The author's position on the events taking place in the modern world is radically different from the typical view of the West as well as the opinion of numerous experts from different countries of the world, which is familiar to the Russian reader. The reader of this book will appreciate the originality of the author's vision of planetary civilisation mission of Vladimir Putin - the President of the Russian Federation.

Dr A. Gupta is a respected social leader in Bangladesh and India, a leader of the party, a businessman. As an educationist and a philanthropist, he dedicates his life to the development of education and culture in backward and far places of Bangladesh. He travelled a lot to find the “truth” behind mysterious causes of inequality in society learning about the history and culture of different peoples.

Dr Gupta is a worthy representative of the ancient Bengal. Bengal consists of the Western part, which is a part of India, and the Eastern part which is part of Bangladesh. Culture and history of Bengali people, despite the territorial division, is unified and closely associated with the culture of the entire Indian subcontinent.

Based on studies of the causes of the bloody First and Second World wars, the Vietnam and Korean wars, the author came to a single conclusion: all the wars were provoked by the US and its allies fully supported by themselves to solve their interests – wars help to pull the country out of the coming economic collapse. Dr Ashok Gupta is the author of the following books: "Existence", “End of the Supremacy", “Strategy of East and West", "Key of losses" and "Russia will build a beautiful world by 2030".

You have subscribed to alerts for Ashok Gupta.

You have been added to Ashok Gupta's favorite list.

You can also sign-up to receive email notifications whenever Ashok Gupta releases a new book.