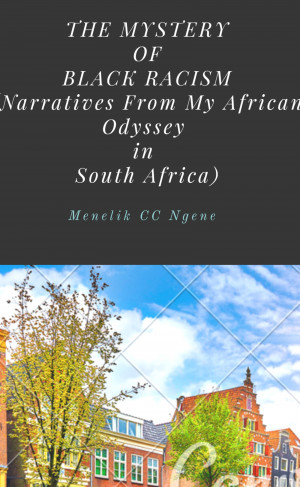 The Mystery Of Black Racism: Narratives From My African Odyssey in South Africa

Sad reality is that they are still currently doing the same crimes with the help of every country and global institution that claimed they hated injustices and fought against white apartheid racism.

This book is an excerpt from the personal narrative of of this present writer 's true life personal experience facing life threatening persecutions, as he moved from being an associate pastor of a majority white church in South Africa to living and working in South Africa with Nelson Mandela,developing SUCESS solutions for all of South Africa's problems, influencing government and private decisions in all the post Nelson Mandela South African Presidencies, while experiencing life threatening persecutions working with intellectual property thieves representing all post white apartheid Presidents of South Africa,their families, top Academics, Activists,politicians, fleedom fighters,ruling and opposition political parties, US government spies,Coretta Scott King's KLTC and South African Churches

Every black South African leader mentioned in this book, helped facilitate and execute crimes against humanity and the humanity of over 800,000 fellow humans from many countries in four continents I helped with humanitarian human rights advocacy.

Anyone whose name is not mentioned here is not innocent. Welcome to my African Odyssey in South Africa part one.

THE MAN WHO SAW AND LIVED IN YOUR TOMMORROW.

https://lnkd.in/gPJDDuE
________
Menelik cc Ngene had always seen & lived in your tomorrows but your leaders and those who record humanity on Earth always mis credit his works and assign his accomplishments to others because they do not want you to know this truth. This explains why you only hear about Menelikcc's works when it's credited to others.

Menelikcc's over 27 year old article which he published in EUPHORBIA,the Uiversity of Jos student scientific Journal of Botany as it’s Editor in Chief was ahead of the so called new innovation Algae production of biofuel hydrogen fuel for cars in Germany, Israel,Exxonmobile USA etc.

His 2003 scientific seminar contributions to South Africa's medicinal plants seminar at their Agricultural Research Council in Roodeplaat,near Pretoria directly led to the making of the South African law called the Traditional Health Practitioners Act 35 of assented by the South Africa President on 11th February,2005 and published in the South African government Gazette Volume 476 number 27275.

The 2003 South Africa Seminar was a copy cat version of a 1992 University of Jos,Nigeria medicinal plants workshop organised by Menelikcc's own University of Jos Department of Botany published on the back page of the 1992 edition of EUPHORBIA, the University Of Jos students Journal of Botany which Menelik served as Editor in Chief.

Menelikcc's over 27 year old University of University Of Jos final year undergraduate Scientific research project titled BACTERIA DEGRADATION OF CELLULOSE won a Novel Prize for some American and British scientists 2-3years ago. They only for used viruses instead of bacteria to repeat similar scientific experiment and won themselves lots of propaganda and were paid Cash money for their copy cat effort.

The Money was disguised as the Nobel prize though they did not have the academic genius to discover the catalyzing Ngenase enzyme Menelik cc Ngene discovered in the course of his original scientific experiment over 27 years.

Menelikcc's volunteer medical humanitarian online and on land educational outreach project during the ebola crises was simultaneously hacked, secretly copied and adopted by Nigeria and the United Nations WORLD HEALTH ORGANISATION hackers as template to save human lives and contain the spread of Ebola worldwide.

Menelikcc's anthropological work on human origins published in three of his 2004 books,THE DESTINY OF THE BLACK RACE, EVOLUTION, CREATION & RACISM and WHAT IF JESUS WAS BLACK?, was ahead of modern Scientific and religious education by at least 16 years. His scientific colleagues on confirmed that Jesus was not black, 3-4 years ago.

His twelve 2019 books seen in the book list below shone so much educational light of every subject he wrote on that it redefined everything everyone thinks they know about knowledge in the fields of onowledge he wrote on. https://lnkd.in/gPJDDuE
Billions of people in every continent of the world, a few years ago, miscredited Menelikcc's published works to South Africa's notorious idea stealing University of the Witswatersrand after the South African University staged a human fossil bone find in their homo naledi scientific scam which they conducted by dramatising ideas copied in two chapters of Menelikcc's 2004 book,EVOLUTION,CREATION & RACISM.

The Global Warming and Climate Change ideas stolen from Menelikcc’s internet posts and his 2008 book, THE SECRETS TO THE WHITEMAN'S FEARS ON GLOBAL WARMING became the ultimate standard of anti corruption educational knowledge,that hackers and fraudsters working for the UNITED NATIONS & EUROPEAN UNION made distorted versions of it and laundered it using teenagers ignorant in science, economics and high school education bribed with propaganda and luxury to beg politicians to loot the global economies under the guise of fighting climate change and global warming. Also used were bush burners,arsonists, UN,US,Europe and EU funded, facilitated and staged climate change fake news protests and a mentally sick ,school dodging 16 year old Swedish child con artist to stage crime cover up fake news events to sustain their lies.

Menelikcc's 2004 ideas on human origins still rules the world of education while one of his twelve 2019 books EVOLUTION & CREATION ARE DIFFERENT SIDES OF THE SAME IGNORANCE ,THE SECRETS OF EDEN & THE FORBIDDEN FRUIT, THE ALTERNATIVE HISTORY OF THE ORIGINS OF BLACK PEOPLE became the ultimate standard of knowledge which redefined everything everyone thinks they know about God,religion and human origins.

His internet posts & writings on politics, economics and the future of your world still governs your world. This explains why the US,EU,UK,RUSSIA,CHINA,VATICAN & their crime partners in every country still hack and fake whatever Menelikcc’s writes before making any global decisions or after making the usual mistakes that always define their incompetence as the so called leaders of their victims

Now you understand why Menelik cc Ngene knowledge system is still the most copied and faked knowledge system still hacked and copied by your world leaders, leading experts and global institutions.

Menelikcc is considered to be a zillion light years ahead of your loudmouth experts in your #fakenewspropaganda. He is still considered the light of your world and the legend of all the greatest SUCESS solutions legends ever lived.

He founded a new field of Project Management Study called the Biblical principles in project management,and used it to train the deans,deputy deans,circuit leaders and top leadership of the Central Diocese of the Evangelical Lutheran Church in Africa and train the ordinands of the Church of England Anglican Communion's Desmond Tutu School of ministry.

Working with a Johannesburg based King Luthuli Transformation Centre for Southern Africa which was founded (under the auspices of Mrs Coretta Scott King,wife of America's Dr Martin Luther King Jr' ) by
some of Menelikcc Ngene's ex work colleagues in partnership with the Coretta Scott King founded Martin Luther King's Centre in Atlanta,USA and the US Embassy in South Africa, Menelikcc
helped found & mentor over a hundred Start up Public benefit organisations in South Africa.

Working alone,Menelikcc built the greatest Africa and Diaspora Ministerial Action network to against HIV/AIDS to assist South African residents that were infected and affected by #blackapartheidANC money making HIV/AIDS program.

Menelikcc also created a half a billion job opportunity project to help jobless humans in South Africa and other countries of the world.

Almost all the Menelik cc ngene project which were secretly hacked copied, stolen and misapplied by South African goverment for their health, energy,water,housing,transport,education,personal,regional,provincial and national development failed.
Today, 26 years after exclusive black apartheid rule of South Africa,replaced white apartheid governance, recycled versions of Menelikcc's ideas are still touted as the solutions to their government touts as solutions to their failed country,iits job creation, state owned enterprises,energy,water,health,education and social problems.

As a KNOWLEDGE & INNOVATION genius, ideas which were hacked and secretly adapted from his works had been used to solve global problems, startup and run first degree bachelor of arts university programs in five South Africa universities, win US presidential elections for the White House and US Congress, reshape and run the US, European Union,Nigeria,South Africa,France,German,China,Russia governments and your world.

Menelik cc Ngene is the only world leading global influence which is being persecuted to hide the global crimes against his humanity, the global thefts of his ideas, the global thefts of his intellectual property, for refusing to be corrupt, for having zero crime convictions in every country and continent on earth since birth and for being the most helpful human ever lived.
If you think these are in the past. Think again,look,listen & learn. The year 2020 is on a few days old, ,but your world and it’s time contractors are already gone on a copy, fake or distract attention from everything menelikcc does overdrive from the South Africa President misleading his political party with words copied from my intellectual property they stole, to Australia’s staged bush fires,US,IRAN,TURKEY,SAUDI ARABIA,,UKRAIN,BRITISH & FRENCH crime cover-up blood money assassinations in the Middle East and the British ruling family faking a royal disharmony to mirror my anti crime posts against the .EU,.S & BRITISH funded IGBO- NIGERIA & VATICAN coordinated use of 419 fraudsters, lies fake documents, fable tales, and judicial failure to steal my personal property, steal my EU diplomatic indenisation arears 2008-2020, sabotage my incomes & earnings, steal my inherited funds,real estate assets from his father’s estate in the hope he will hate members of my father's royal family which he still don’t hate.
Everything they document as news are information inspired by what I do,write or say. When your world is not crediting my accomplishments to another, they are bribing people to stage or recycle fake news events that is designed to look like what they think I did, say or write. Aim is to distract attention from my works, hide their crimes or make you believe Menelikcc have contemporaries on earth. Reality is: Menelikcc do not have contemporaries.

Menelikcc's posts on the US,IRAN,IRAQ,BRITISH politics of assassination which revealed it as a twisted replay of THE MAN IN TEHRAN season three, episode eleven of American TV series HOMELAND. America banned Nigerians from spying for permanent residency in USA until Nigeria banned Nigerians from buying foreign films and pledged to do more crime against Menelikcc.

South Africa's Crime coverup State capture investigation also known as Zondo commission is a Trump style hoax impeachment type of crime cover up exercise designed to bring these same criminals to justice using either real or propaganda crimes they committed except the real crimes they committed and are still committing against Menelikcc. It’s an attempt to hide government crimes against Menelikcc.

Now you understand why the US REPUBLICAND AND DEMOCRATS in Americans are doing same thing with their Impeached Donald Trump's #hoaximpeachment trials. Aim is to hide Donald Trump & Obama White House crimes against Menelikcc.

You have subscribed to alerts for Menelik Cc Ngene.

You have been added to Menelik Cc Ngene's favorite list.

You can also sign-up to receive email notifications whenever Menelik Cc Ngene releases a new book.