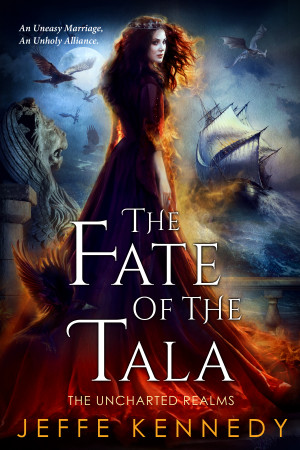 The Fate of the Tala

By Jeffe Kennedy
An Uneasy Marriage,
An Unholy Alliance.

The exciting conclusion to the story begun in The Mark of the Tala! The introverted, awkward middle princess is now the Sorceress Queen, Andromeda—and she stands at the precipice of a devastating war. For Andi, the time to grow into her true power has come. . . More
An Uneasy Marriage,
An Unholy Alliance.

The tales tell of three sisters, daughters of the high king. The eldest, a valiant warrior-woman, conquered her inner demons to become the high queen. The youngest, and most beautiful outlived her Prince Charming and found a strength beyond surface loveliness.
And the other one, Andi? The introverted, awkward middle princess is now the Sorceress Queen, Andromeda—and she stands at the precipice of a devastating war.
As the undead powers of Deyrr gather their forces, their High Priestess focuses on Andi, undermining her at every turn. At the magical barrier that protects the Thirteen Kingdoms from annihilation, the massive Dasnarian navy assembles, ready to pounce the moment Andi’s strength fails. And, though her sisters and friends gather around her, Andi finds that her husband, Rayfe, plagued with fears over her pregnancy, has withdrawn, growing ever more distant.
Fighting battles on too many fronts, Andi can’t afford to weaken, as she’s all that stands between all that’s good in the world and purest evil.
For Andi, the time to grow into her true power has come. . .
Available ebook formats: epub mobi pdf lrf pdb txt html
First 20% Sample: epub mobi (Kindle) lrf more Online Reader
pdb
Price: $6.99 USD
Buy Add to Library Give as a Gift
How gifting works
Create Widget
Tags: shapeshifter sorceress fantasy novel fantasy epic fantasy female magic romance evil sorceress mage sorceress magic battle
About Jeffe Kennedy 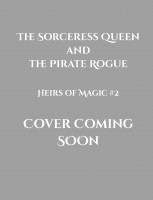 Reviews of The Fate of the Tala by Jeffe Kennedy