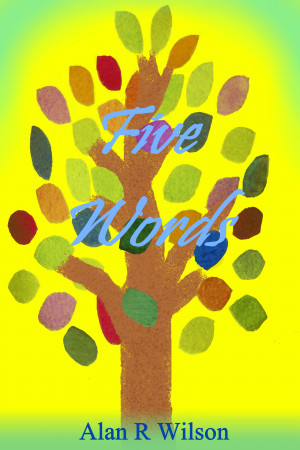 By Alan R Wilson
Steven’s and Sarah’s story if ‘Steven’s short story in ‘Sarah’ was ‘The Day That Was’. A disapproving father attempts to separate them by sending her to Oxford. Steven follows but they run afoul of the man her father wants to ‘sweep her off her feet’. Still together 43 years later Sarah rattles the ‘establishment’. The reaction is to try to force her to resign but she takes the battle to them. More
A light romance looking at paternalism, male entitlement and how small events can have a disproportionately large impact on a person’s life. ‘Five Words’ can be considered a ‘companion’ book to ‘Sarah’. It is the story of Steven and Sarah if ‘Steven Riddell’s short story’ was ‘The Day That Was’. While ‘Five Words’ stands by itself, there are echoes of ‘Sarah’ throughout the second part of the novel which enhance the narrative.
Synopsis
It is 1974 and Sarah and Steven meet and fall in love as students at Melbourne University. However, Sarah’s father has other plans for her and does not approve of the young male she has found with the too long hair and too long boots. He organises a place for her at Oxford University, sure she will accept the opportunity and sure the separation from Steven will dampen their adore. Unknown to him, Steven thwarts his plans by applying for and obtaining a scholarship to Oxford.
The first year in Oxford is challenging because Sarah’s father has also arranged for her to meet the right sort of person. In particular, an up and coming lawyer with good connections and good prospects who he expects to ‘sweep her off her feet’. Things become ugly as he and some friends attempt to wrest Sarah away from Steven by first discrediting him, then in more physical ways. Some of the tension is assuaged by the close friendship the two make with the women who was like a fairy godmother to Sarah’s father and grandmother during the 1930s.
At the end of the first term in Oxford the narrative jumps forward 43 years to the same time that Sarah and Steven met as adults in ‘Sarah’. The two both have successful careers and three adult children making their way in the world. Sarah causes a stir when she gives a lecture on the misogyny and poor treatment of women rampant in business. There is pressure from ‘the establishment’ for her to resign but she resists and ends up taking the fight to the privileged men, some of whom she has damning reports on.
Available ebook formats: epub mobi pdf lrf pdb html
First 20% Sample: epub mobi (Kindle) lrf more Online Reader
pdb
Price: $1.99 USD
Buy Add to Library Give as a Gift
How gifting works
Create Widget
Tags: literature contemporary light romance entitlement strong female social comment paternalism
About Alan R Wilson

As an undergraduate in the 1970s I was a member of the Melbourne University Science Fiction Club, contributing to and editing the magazine, Yggdrasil, which was largely devoted to fiction. We also held writers workshops and since then I have continued to ‘scribble away’ at various things with the seed of the ‘Anita’ novels sprouting in the late 80s.
Personally, I found it impossible to write seriously while working full-time. (I have a Ph D in Physics and worked in research and have published numerous scientific articles). Always wanting to be a novelist, I took time off a few years ago to see if I had it in me to produce a novel. It worked for me and I retired properly and have dedicated myself to writing ever since.
Writing is great fun, I love it. Whenever asked I say it is ‘better than reading’ because I am continually surprised as the plot develops. I am definitely not an author who has a novel plotted out from start to finish. As Ray Bradbury said, ‘It would be boring if you knew where it was going’. Indeed, the main protagonist in ‘Anita’ suddenly appeared a third of the way into the novel.
There are 4 more books on the way in the Anita Histories and I am also dabbling in some contemporary novels too. Keep tuned, because the next 3 Anita novels may come out quite quickly.

You have subscribed to alerts for Alan R Wilson.

You have been added to Alan R Wilson's favorite list.

You can also sign-up to receive email notifications whenever Alan R Wilson releases a new book.