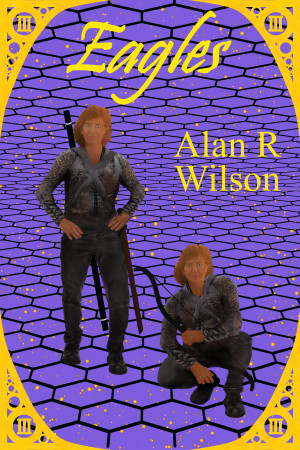 By Alan R Wilson
Anita raises Vanessa, the child she found after the fateful battle for Darham, and assumes the life of an herbalist. An old friend’s death and a person from the past starts a chain of events which uncover secrets and restore Anita’s hidden memories. She heads north to reaffirm old friends, Vanessa heads south where she shows her true character. They later join forces to confront their old nemesis. More
Anita’s story continues but this time she has a companion.
After fleeing the battle for Darham Pality, Anita takes up life as a herbalist and animal healer. However, even though her memories are suppressed, old habits come to the for and she trains the child she discovered on that fateful day in all her arts and skills. Indeed, she and the child, Vanessa, are surprisingly similar, to the point where they are mistaken for sisters and even twins when Vanessa is older.
The Servants of The Bear are a constant worry and the pair frequently move to avoid confrontation. An old friend dies and Anita stumbles across and rescues a person from her past. It starts a chain of events which lead to the uncovering of secrets and the restoration of Anita’s hidden memories. Anita learns to live with what she is and feels compelled to head north to reaffirm old friendships. Vanessa continues on her southern journey and comes fully of age, demonstrating her true character is much like her ersatz mother’s when she clears corruption out of the southern realms and becomes entangled with the Servants of The Bear in the process.
Anita, Vanessa and the northern realms join forces to confront the southern Barons and their old nemesis, the Servants of The Bear.
Available ebook formats: epub mobi pdf lrf pdb html
First 20% Sample: epub mobi (Kindle) lrf more Online Reader
pdb
Price: $2.99 USD
Buy Add to Library Give as a Gift
How gifting works
Create Widget
Tags: self discovery battles medieval religious cult female heroes post apocalyse hidden talents
About Alan R Wilson

As an undergraduate in the 1970s I was a member of the Melbourne University Science Fiction Club, contributing to and editing the magazine, Yggdrasil, which was largely devoted to fiction. We also held writers workshops and since then I have continued to ‘scribble away’ at various things with the seed of the ‘Anita’ novels sprouting in the late 80s.
Personally, I found it impossible to write seriously while working full-time. (I have a Ph D in Physics and worked in research and have published numerous scientific articles). Always wanting to be a novelist, I took time off a few years ago to see if I had it in me to produce a novel. It worked for me and I retired properly and have dedicated myself to writing ever since.
Writing is great fun, I love it. Whenever asked I say it is ‘better than reading’ because I am continually surprised as the plot develops. I am definitely not an author who has a novel plotted out from start to finish. As Ray Bradbury said, ‘It would be boring if you knew where it was going’. Indeed, the main protagonist in ‘Anita’ suddenly appeared a third of the way into the novel.
There are 4 more books on the way in the Anita Histories and I am also dabbling in some contemporary novels too. Keep tuned, because the next 3 Anita novels may come out quite quickly.

About the Series: Anita Histories

'Anita', 'Betrayals', and 'Eagles', follows the life of Anita 1500 years after humankind nearly eliminated itself. Her nemesis is 'The Servants of the Bear', a religious cult which was instrumental in preserving humanity but has now falling into dogma. Some ancient technology is amazingly durable. While the Servants reject everything from the times of Chaos Anita and her companions offer a new way which does not condemn everything old as evil. This inevitably leads them into conflict with the Servants and their allies.

You have subscribed to alerts for Alan R Wilson.

You have been added to Alan R Wilson's favorite list.

You can also sign-up to receive email notifications whenever Alan R Wilson releases a new book.