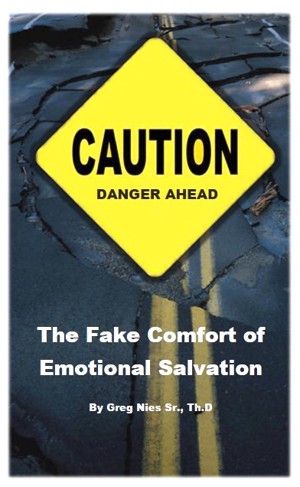 The Fake Comfort of Emotional Salvation

By Bishop Greg Nies Sr., Th.D.
Dive deep into the Word of God and find out the meaning of true salvation. Learn to distinguish between feelings and faith as you strengthen your walk in the Lord.

In 1990, Reverend Greg and Terri Nies were called by God to form New Beginnings Fellowship. They started this mission on the foundation of the Word and the prompting of the Holy Spirit. Acts 26:17-18 (NIV) “I am sending you to open their eyes and turn them from darkness to light…”

Greg attended Oral Roberts University, where he took bible studies. The earlier years of Greg’s walk with God were very active as God had him moving in the Holy Spirit.

In 1982, Greg received a word of knowledge from a friend, Ralph Nault, to go check out the 700 Club. After talking with the 700 Club, Greg became a phone counselor and recruiter, where he met his future wife, Terri. Terri and Greg were married on April 23, 1983.

In the mid 1980’s, Greg and Terri started Cutting Edge Ministries, through which they did prison seminars (starting with the help of Dallas and Linda Strom) and prison marriage seminars.

During this time, by the grace of God, the Holy Spirit brought Greg and Terri closer together in a special way. Their prayer and fellowship with Jesus Christ held them together and eventually was the basis of their future ministry to couples in prison and to couples who had lost a child to death. The Lord Jesus opened up the ministry of healing hearts to Greg and Terri after Daniel’s death.

In 1990, Greg was ordained as a pastor after working in several churches with Terri. Soon after, Pastors Greg and Terri started New Beginnings Fellowship.

You have subscribed to alerts for Bishop Greg Nies Sr., Th.D..

Would you like to favorite Bishop Greg Nies Sr., Th.D.?

You have been added to Bishop Greg Nies Sr., Th.D.'s favorite list.