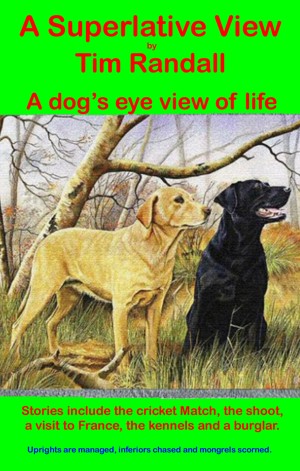 From a Holiday cottage
“Before you go to sleep dear boy, could you just sort out this inferior for me.”
“For Hubert’s sake Worthy, leave the poor inferior alone. You can have the blanket.”
“What,” Worthington spluttered, “Let a superlative sleep on the floor and an inferior sleep on the sofa?”

From a bit of upright fun (The cricket match)
“Well that old upright, he is what they call an umpire. He decides the rules, or something. Anyway it seems he is always ruling against the Boss's side.”
“Well it only be a bit of upright fun.”
“Yes dear boy. But the Boss's friends are taking it seriously. They may not even stay for the barbecue.”
“And that would be a disaster for you Worthy me old,” said Sam with a smirk.

From The Burglar
“Ah!” said Worthington, finally getting the message. “Who is it then?” he added.
“I don’t know now do I!” was Sam’s cryptic answer.
“Well dear boy what do you think they are doing?” Asked Worthington, then a nasty thought occurred to him, “I say there not eating those rather good chocolates are they.”
Sam was angry at Worthington’s complete lack of interest. “Expect they are Worthy, I mean there be nowt else in there.”
Worthington came quickly to his feet. “We’d better investigate,” Worthington decided.

Sam Worthington has been around for about twenty years working as a travel writer, bar and restaurant reviewer for several print publications as well as many websites. As can be seen from the website samworthington.com is a nom de plume of a successful restaurateur and publican.

A student of economics Tim Randall was a keen politician in his youth and was member of the Hyde Park Tories and vice chairman of Chelsea Young Conservatives. He received international publicity as the pirate postmaster general during the postal strike of 1971. At that time he ran a building business in Chelsea and also was involved in various nightclubs as well as being a sort after party Disc Jockey. In the mid seventies, Sam worked for the electronic security industry selling advanced digital coding systems. In the early nineties Tim was the director of the Budapest Week, the first English Language paper in Eastern Europe (as it then was). He has worked in Turkey, Portugal, Holland, Italy, Spain, Hungary, Poland, Thailand and now lives in the Philippines: in addition he has traveled extensively in Europe, Asia and America.

You have subscribed to alerts for Sam Worthington.

You have been added to Sam Worthington's favorite list.

You can also sign-up to receive email notifications whenever Sam Worthington releases a new book.