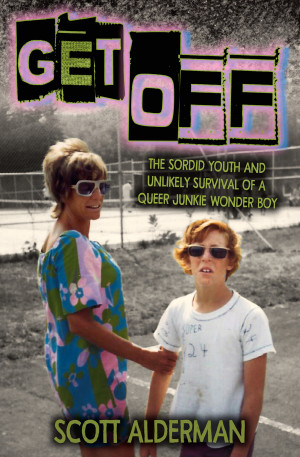 Set against a backdrop of New York City in the grungy, glittering 1980s, GET OFF is a memoir about desperate living, hidden promise, double lives, and the danger of getting too much too soon. More
This eloquent, entertaining, sometimes absurdly hilarious book is a rollicking tale of how an anxious theater nerd from Long Island created and ultimately emerged from a hell of his own making.

Tossed out of two colleges his freshman year, Scott Alderman was a drug-addled coke dealer with no future and no aspirations, until he found a mentor and discovered untapped talents. A swift rise in the music business seemed as exhilarating, frightening, and out of control as the secret life he led trawling gay bathhouses and Times Square pick-up spots for sex and drugs. And just as his career took off, he started using heroin, kicking off an odyssey of rehabs, mental hospitals, busts, and disastrous jazz tours.

A caustic gay drug counselor and a critical edition of On the Road finally broke through, and showed him a path to living honestly and without fear. Written as a testament for his young son, Scott Alderman's account of his wasted youth and hard-earned manhood will resonate with and inspire anyone who has been lost and struggled to find their way back.

"Get Off is genuine and honest and powerful. The writing has incredible momentum and sustained movement, really conveying the velocity and chaos of the experiences; there's a real feeling of life happening. Even when the book veers into the extreme, the voice is open and matter-of-fact, which leaves the reader free to react. This is an intense and rewarding memoir."
- Vivian Heller, author of City Beneath Us

"Prepare yourself for a rollicking, shocking, and inspiring story of life's lowest lows and greatest heights in Get Off: The Sordid Youth and Unlikely Survival of a Queer Junkie Wonder Boy by Scott Alderman. This tell-all read is graphic and unabashed, detailing a life of sex, drugs, and rock 'n' roll from both extremes: the ecstatic and the tragic. Unsentimental but sincere, Alderman is able to get past the romance of his own tall tales to pry out wisdom and meaning, as well as difficult lessons that ring timeless for youth of any generation."
- Self-Publishing Review, ★★★★½

"Scott Alderman's book is the story of a scrappy genius, a scenester connector, navigating the rock and jazz music worlds of D.C. and New York, all the while riding the highs and lows of drug addiction and the pain and confusion of a closeted life. A fast-paced portrait of a young life lived."
- Rachel Lindsay, Author of RX

Scott Alderman began working in the live music business in 1979, first as a roadie and stage manager in rock & roll, and then as road manager and agent for top touring jazz artists. In the eighties, he owned and booked Fat Tuesday’s, a NYC Jazz club.

After getting clean in 1987, he worked in human services as a counselor at Bailey House, a residence for homeless people with AIDS, and at psychiatric hospitals and methadone clinics in Washington, D.C. and San Francisco.

In the nineties, his career included stints in management and operations, first at Lehman Brothers and then at Morgan Stanley. In 1998, he was on the management team that took a consolidation of twenty national messenger and courier companies public.

​The turn of the millennium saw Scott return to the music business to launch the Tattoo the Earth festivals, which included an eighteen-city US tour. In 2001, after the law banning tattooing in Massachusetts was overturned, he produced the first tattoo festivals in the state.

​In the teens, he was the administrative director for the Program in Narrative Medicine at the Columbia University College of Physicians and Surgeons, and he is a founding director of the Center for Narrative Practice.

​Scott has a BA in literature and writing from Columbia University. He was born in New York City, and lives in Massachusetts with his wife and kid.

You have subscribed to alerts for Scott Alderman.

You have been added to Scott Alderman's favorite list.

You can also sign-up to receive email notifications whenever Scott Alderman releases a new book.