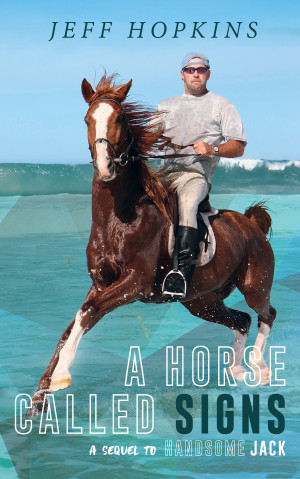 A Horse Called Signs: A Sequel To Handsome Jack

By Jeff Hopkins
Charlize Thwaites, Koen Jandamurra, Ray Ratcliffe and Jack Burton are all on individual road journeys, and a horse called Signs is on the road back from the breeding barn to the racetrack. All roads lead to a property in Serpentine in Western Australia, where all this will play out with some unexpected results! More
Charlize Thwaites is on the road home. Firstly, to South Africa, and then back to Western Australia where her beloved husband, Marnus, lies in Fremantle Cemetery.

A teenage indigenous boy from Broome, Western Australia, Koen Jandamurra, is on the road to a traditional initiation, and becoming a man within his Yawuru mob. He is also displaying skills as a talented swimmer under the tutelage of Warwick Taylor. Romanian gymnastics’ champion and coach, Katarina Jelkavich, thinks Koen might be an Olympic gymnast in the making.

Ray Ratcliffe is training the second riding prodigy in his long and turbulent career, and is on the road from perdition to redemption. Jack Burton is experiencing the thrills and spills of a champion

A thoroughbred entire called Signs, has already sired five fillies of his own. With a distinctive white blaze and three white socks, he loves to swim and run, and is on the road back from the breeding barn to the racetrack. All roads lead to a property in Serpentine in Western Australia, where all this will play out with some unexpected results!
Available ebook formats: epub
Price: $5.99 USD
Buy Add to Library Give as a Gift
How gifting works
Create Widget
Tags: swimming gymnastics boarding schools juvenile justice going home architecture and design australian indigenous culture boyhood to manhood perdition to redemption thoroughbred racehorses
About Jeff Hopkins

Reviews of A Horse Called Signs: A Sequel To Handsome Jack by Jeff Hopkins