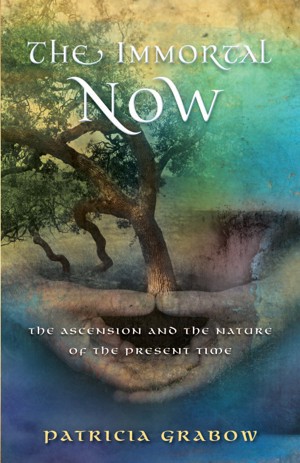 THE IMMORTAL NOW: Ascension and the Nature of the Present Time

"Never has this information been more critical to each one of us than in this time of turmoil the globe over. the physical transition of the planet; the terrible pull towards tribalism as backlash in an age of enlightenment. Now more than ever we need to understand the compassionate and loving creative part we will all play in the shaping of the future and the exciting discovery process within the consciousness within the individual." - Rosie Porter, Newspaper publisher

Patricia's clinical death experience was the beginning of a new life that at the time did not seem possible. Her earlier life had led her from upbringings in Montana to travels in Asia, high school in the Pacific, university in the West and Washington State, a first marriage in Washington DC, and a second chiefly in Alaska, where she worked in Native education in both Anchorage and small villages in the remote interior.

Following the accident in London, Patricia returned to the U.S. and began to receive guidance that would lead her out of the tragedy and loss she had experienced before the accident, as well as the longing for the “love to the millionth power” she had during the accident, to the great beings around her who would assist her on the generation of the books she was to write, and to survival. Among them were the remarkable McArthur family, including Charlotte, who along with Christine Kauffman assisted Patricia with The Immortal Now; mentor Barbara McCormick, early editor Jay Booth, collaborator Rosie Porter, and final editor Cheryl McLaughlin. The story of the period after the accident is truly a story of love, salvation, and soul mates, as the writing had promised.

Patricia, currently living in Montana with a master’s degree in education, is the mother of three sons (Chris, Tim, and the youngest, Rob, who was born at the end of the work on the first book). She is also a proud grandmother. Learn more about Patricia Grabow at: https://profiles.google.com/thegrabow

You have subscribed to alerts for Patricia Grabow.

You have been added to Patricia Grabow's favorite list.

You can also sign-up to receive email notifications whenever Patricia Grabow releases a new book.