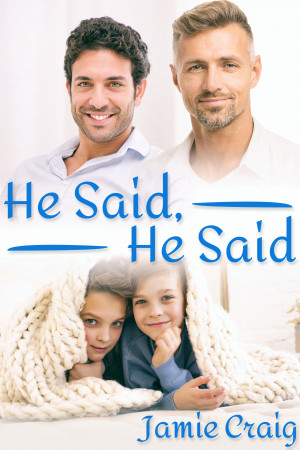 He Said, He Said

Single dads Peter and Aaron meet in the park when their eight-year-old sons strike a friendship. On the surface, they have nothing in common, but continued play dates force them to re-evaluate that position. When Peter discovers Aaron isn’t as straight as he thinks, they agree to a friends with benefits arrangement. Sex for the sake of sex. But even those appearances can be deceiving. More
He said ...

So what if I thought he was gorgeous? He was also kind of a jerk. But then our kids decided to be best buddies, and I kept having to see the guy, and ... well, keeping him strictly as fantasy material who never opened his mouth got a little harder after that.

I don't have time for a personal life. I've got a son whose medical history requires my full attention and a company I need to keep afloat in this awful economy. Making friends just isn't a priority. At least until the choice got taken away from me.

On the surface, the only thing single dads Peter Irving and Aaron Hardison have in common are their eight-year-old loner sons. But both men soon learn that appearances can be deceiving ...

First 20% Sample: epub mobi (Kindle) lrf more Online Reader
pdb
Price: $4.99
$3.49 USD
Buy with coupon Use the code AGB30 at checkout for 30% off during our site-wide promotion!
(Offer good through April 20, 2020 )
Have a better coupon?
Add to cart, then apply your coupon
Add to Library Give as a Gift
How gifting works
Create Widget
Tags: gay

You have subscribed to alerts for Jamie Craig.

You have been added to Jamie Craig's favorite list.

You can also sign-up to receive email notifications whenever Jamie Craig releases a new book.