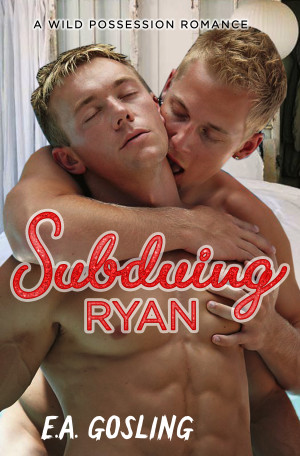 By E. A. Gosling
Adult

Ryan
I was hurt before, it's hard for me to commit for a serious relationship right now.

Paul
I will make sure you obey me the way I want you! Subduing you is not an easy task. I will make sure you fall head over hills. More
Ryan Siebol is wary of relationships. The man he loved for years, Andrew Morris, cheated on him, and Ryan isn't sure he could ever endure anything serious right now. Only casual will do. But Officer Paul Grayling has had his eye on his sad, sexy neighbor for months. He knows that Ryan's heart was broken, but when a chance to get together for a night of fun presents itself, he takes full advantage.

Their chemistry is surprising, and Ryan isn’t sure what to think about how well he and Paul hit it off. Ryan is still hesitant to pursue anything serious, but Paul isn't making it easy, and what they have together could turn into love. It doesn't help that Ryan's ex keeps popping up at the wrong time, asking to get back together again. In the end, though, Ryan and Paul have to decide what they truly want, no matter the obstacles that come their way.
Download: epub mobi (Kindle) pdf more Online Reader
lrf pdb txt
Price: Free! USD
Add to Library
Create Widget
Tags: gay romance lgbt romance friend with benefits gay neighbor hot and steamy romance mm man to man romance wild romance
About E. A. Gosling

E.A. Gosling is an accountant by day and author by night. Raised by a single mother and a gay uncle from a slum area at the outskirt of the city. Since his teenage days, E.A. Gosling has been obsessed with storytelling from flawed and abused women and gay characters as his heroes.

He enjoys daydreaming during weekend, while having a cup of his favorite coffee. He has a lovely daughter and married to an English literature teacher whom he thinks is his walking dictionary. He stays up late most of the night, reading novels and tell the story to his wife as a topic on the following day.

Learn more about E. A. Gosling

You have subscribed to alerts for E. A. Gosling.

You have been added to E. A. Gosling's favorite list.

You can also sign-up to receive email notifications whenever E. A. Gosling releases a new book.