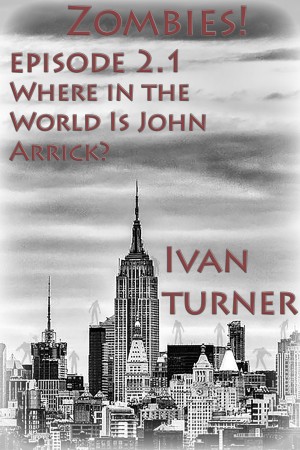 Zombies! Episode 2.1: Where in the World is John Arrick

By Ivan Turner
Rated 5.00/5 based on 1 reviews
It's not the end of the world. After fighting long and hard, humanity has learned to share its world with the undead. After six long months, Malcolm Arrick has finally made it to the U.S. so that he can begin his investigation into the disappearance of his brother, John. Along the way, he will become acquainted with the people who knew John Arrick in the days leading up to his ultimate fate. More
In the early days of the zombie plague, while people were being bitten and dying and turning, John Arrick was very much an ordinary man. The one extraordinary thing about him was his girlfriend. When she came down with the zombie infection, he cared for her until the end and then battled her when she turned. Only later did he realize the consequences of his compassion as he, too, became sick with the plague. But John Arrick did not die. His body fought off the infection. But even as his unprecedented physiology protected him from the bacterium, it could not do so from bullets. And once his body was dead, the infection inside of him was free to take over.

Now his brother has come from the United Kingdom to find him. With no knowledge of John's final fate, Malcolm will retrace his brother's life in those last few months, encountering the people who had had the most impact, Abby Benjamin, Shawn Rudd, and Marcus.

A child of the movies, I was always consumed by fantastic stories told by others and translated into adventures to be retold by me through the action figure medium. As I grew older, I put the action figures away and moved into the realm of role playing. Though I never outgrew role playing, I certainly don't have the time for it anymore. Since I was eleven years old, I've been pouring almost every ounce of creative energy I have into writing.

I graduated college in 1993 with a degree in computer science. I tried my hand at programming for a couple of years and found it pretty unsatisfying. I later became a partner at a comic book store, where I spent several years. Though it wasn't a financial success, the experience I gained from running the store and the people that I met (many of whom I'm still in touch with today) was priceless. After leaving the store, I settled into a career of teaching. I still teach at a public high school in New York. Ironically, I've picked up computer programming again, which is what I mostly teach.

I've been writing the whole time.

I released my first book electronically in 2010. Forty Leap was a turning point for me in both style and story building. The Book of Revelations, which was written earlier but released later, was sort of a midway point between the writer I was and the writer I've become. I experimented with a very odd style and a story that employed diverse characters and controversial situations.

In September 2010, I released the first installment of Zombies! Zombies! has been a tremendous success for me that came very close to being made into a television series. Since Zombies!, I have written a five part miniseries called Castes and have been working on developing tabletops games, the first of which, ApocalypZe, was published in early 2014.

About the Series: Zombies!

A man stumbles down the street and takes a bite out of a woman. When it is discovered that he's been dead for hours, it changes the rules, not only in New York City, but across the world. Zombies! is the story of society moving along at its regular pace while accepting and adapting to a new plague and a new predator on its streets and in its homes.

Great read! Flipping between here and kobo to find as many episodes as i can. Will be buying all! Hubby and i love our zombie lit!

Keep up the great work

You have subscribed to alerts for Ivan Turner.

You have been added to Ivan Turner's favorite list.

You can also sign-up to receive email notifications whenever Ivan Turner releases a new book.