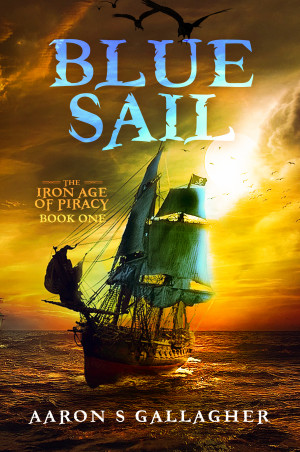 By Aaron S Gallagher
Captain Iago Haken and Royal engineer Gwendolyn Sweet command an entirely new kind of warship- a warship with a singular purpose: to rid the waters of the world of every pirate sailing.

Captain Piter Vierling, pirate and privateer, will go to any lengths to stop them.

When the two meet, all three will be forever changed by the outcome. More
In the crystal waters of the Caribbean seas, a predator stalks unwary merchant ships.

The notorious pirate Piter Vierling freely plunders these and other vessels. Possessed of the ability to hide in plain sight, Vierling and his crew are challenged on the open sea. In Port Royal, Jamaica, a British captain is entreated to stop him.

Captain Iago Haken, armed with a new type of warship, undertakes to stop Vierling once and for all.

As the confrontation draws closer, each of them will be changed in ways they could never suspect.

And so will their world.

The Golden Age of Piracy is over.

Aaron S Gallagher was born in Syracuse, New York and currently resides in Leander, Texas with his long-suffering wife, three rowdy teenagers, and a thoroughly indifferent cat. His writing career began at a young age after he annexed an old mechanical typewriter from his mother.

His work has appeared in Analog Science Fiction & Fact, Ares Magazine, and Escape Pod. He has received both a semi-finalist and honorable mention in the L. Ron Hubbard Writers of the Future contest. His previous novel, The Mercer Street Murder, won the Book Talk Radio Club Award for Best in Crime Fiction 2018. In between haranguing magazine editors he also wrote 17 books and refuses to stop. His genres include crime fiction, science fiction, and drama.

He prefers to read deep stories populated with characters that develop and breathe on their own, and endeavors to write the same. His goal is to create new worlds, compelling characters, and to bring something unique into the world.

You have subscribed to Smashwords Alerts new release notifications for Aaron S Gallagher.

You have been added to Aaron S Gallagher's favorite list.

You can also sign-up to receive email notifications whenever Aaron S Gallagher releases a new book.