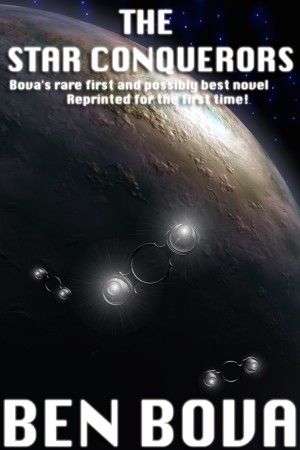 By Ben Bova
Six time Hugo winner Ben Bova's excellent first novel—previously only available as a rare used book costing $500 or more, now an ebook with the original Mel Hunter cover and an essay from Ben on the history of the book! More
Six time Hugo winner Ben Bova's first and possibly best novel, THE STAR CONQUERORS, has been long out of print. There was only one small hardback print run, never reprinted, and used copies are rare, costing upwards of $500. Until now! ReAnimus Press is pleased to announce the publication of THE STAR CONQUERORS in this special ebook edition!

To Explore New Worlds... and Resistance is Futile... all found their home here first with the Captain of the Star Watch vessel in what some say is a virtual blueprint for Star Trek.

I first met Geoffrey Knowland in the last hours of the Siege of Scandia. Of course, I did not know then who he was, or what he was to become.

The Saurian troops of the Masters had struck deep into the Terran Confederation, bypassing several planetary systems at the frontier to attack Scandia. They had appeared unexpectedly in great numbers and seized the three outer planets of the Scandian system before the Terran Star Watch could rush its forces to the area.

THE STAR CONQUERORS is a great story, far too long out of print.

This ReAnimus Special Edition features a special introductory essay from Ben Bova about the history of writing of the novel. (Not to mention, valuable advice to new writers on how to succeed.) As an extra treat this edition also includes the original Mel Hunter cover art in addition to new cover art from Clay Hagebusch.

Available exclusively from ReAnimus Press, THE STAR CONQUERORS is a major publishing event you don't want to miss. Resistance IS futile, so get your copy today!

You have subscribed to alerts for Ben Bova.