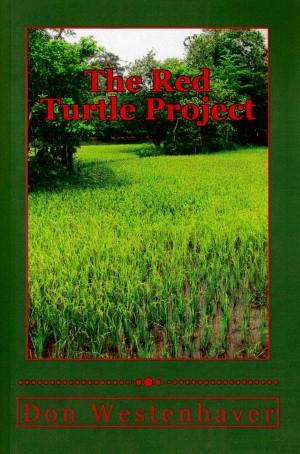 By Don Westenhaver
Liang Weber inherits a fortune from Sing Han, her gangster father when a rival gang assassinates him and then comes after her. She donates the money to a secret project which will ultimately transform Vietnam from Communist to Capitalist, from one of the world’s poorest countries into the newest Asian Tiger. But the gang has infiltrated the project, using it to take control of Vietnam. More
The Red Turtle Project is an international thriller set primarily in Vietnam in the 1990´s. Liang Weber is a beautiful Eurasian woman who inherits $500 million from her recently murdered father, Sing Han, a Singapore billionaire whose fortune is based on smuggling weapons and drugs.
She and her husband Sam learn that Sing Han has been assassinated by a ruthless secret society called the Mandarins. Led by a group of seven Chinese tycoons, the Mandarins have become incredibly wealthy and powerful using murder, kidnapping and theft on a global scale. They are furious when they find out that much of Sing Han´s fortune was transferred to Liang just before they killed him.
After a worldwide manhunt for Sam and Liang, the Mandarins discover them in Vietnam, where she has donated her inheritance to the communist country, one of the poorest on earth, to transform it into a capitalist powerhouse, the newest "Asian Tiger". This grand economic experiment is dubbed the Red Turtle Project.
Five years later, the Red Turtle corporate logo, a smiling cartoon turtle, has become the symbol of the country´s rapid improvement in the standard of living, an icon of nationalistic pride. Behind the scenes, however, the Mandarins gradually infiltrate the Red Turtle Corporation and are robbing the company through smuggling, stock manipulation, and other illegal activity. A reign of terror spreads, and anyone who protests against the crime and violence is immediately eliminated.
Finally the Mandarins´ real plan is revealed. They´re not merely taking over the Red Turtle Corporation, but the entire country of Vietnam. On July 1, 1997, Hong Kong, the bastion of capitalism and the home of the Mandarins, is reverting to the control of Communist China. The secret society is moving its base to Vietnam, to be feudal lords of the newly rich country.

First 25% Sample: epub mobi (Kindle) lrf more Online Reader
pdb
Price: $3.99
$1.60 USD
Buy with coupon Use the code AGB60 at checkout for 60% off during our site-wide promotion!
(Offer good through May 31, 2020 )
Have a better coupon?
Add to cart, then apply your coupon
Add to Library Give as a Gift
How gifting works
Create Widget
Tags: thriller vietnam capitalism
About Don Westenhaver

As a boy I planned to become a Catholic priest, but I dropped out of the seminary because I didn’t want someone else controlling my life. Making the same mistake a second time, I enlisted in the Marine Corps. The Marines trained me to be a Vietnamese interpreter, so I expected to be assigned to a glamorous intelligence unit. When I landed in Vietnam in April 1967 the USMC assigned me to an infantry company near the DMZ. They didn’t need an interpreter and gave me a rifle and a radio to haul through the jungle. I was quickly promoted to sergeant because the more senior radiomen kept getting shot.

Back in the USA I finished college and became a finance executive in the oil industry, traveling frequently to Asia, Europe, Latin America and Africa. The travels expanded my view of the world and made me appreciate other cultural values. Paradoxically I also learned to appreciate the United States more. It is the best country on earth, but there are things we can learn from others. After the oil business I moved to Nissan’s national headquarters, where I remained until retirement.

I have been married to my wife Ellie for over 40 years. We live in Southern California and have two grown daughters and two grandchildren. We are retired and spend much of our time assisting four different charities. We also love traveling, reading, golfing, and of course hanging out with the grandkids. I am a member of the Southern California Writers Association and the Military Writers Society of America.

You have subscribed to alerts for Don Westenhaver.

You have been added to Don Westenhaver's favorite list.

You can also sign-up to receive email notifications whenever Don Westenhaver releases a new book.