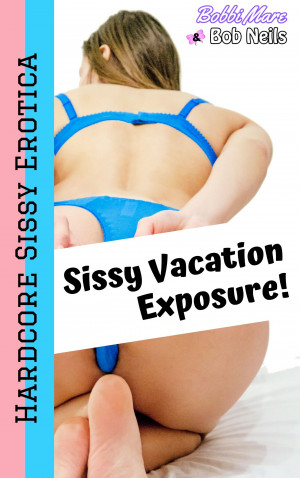 Rated 5.00/5 based on 1 reviews
The way Robert’s eyes widened at the slender tube of lipstick was just so precious. It was as if the idea of wearing lipstick were more shocking than that of having taken a strange man inside his mouth. She’d only meant it as a distraction from what he was being asked to do, but now she wanted it.

She wanted to see her husband be a sissy.

Was it her imagination, or could it be he wanted it too? More
Today, on this beautiful morning in paradise, Robert was dressed in one of his wife’s black swim skirts, which felt like bikini bottoms underneath, but which looked like a lightly ruffled skirt on the outside. So long as nobody looked too closely, they were close enough to his normal swim trunks to be passable, but he felt like a sissy - like an accepted sissy - in a way he never had before.

And to think it had all begun with a strange man on the beach with a perverse fantasy to place his manhood inside Robert's mouth. He had been exposed as a sissy. His wife knew he was a sissy. And she was okay with it. More than that, she seemed energized by the fact.

He didn’t know whether Douglas had somehow sensed the sissy inside of him, or whether his wife had inadvertently twisted the whole perverse fantasy into something different with her teasing application of lipstick, but it didn’t matter. Just so long as the older man wasn’t done with them. He couldn’t handle another week of vacation without the throbbing manhood to which he’d so quickly become accustomed.

If you are not at least 18 years old, with an open mind and an insatiable sexual curiosity, then you probably shouldn't be reading my bio, much less my stories.

Sissy Vacation Exposure is the story of Robert, a married man with kids who is a sissy in the closet. Robert considers himself alive only on Thursday afternoons, that is when he has all the free time for himself to transform and be his true self. Everything changes when Robert and his family go for their Caribbean vacation where they meet a man who makes a proposal for them which changes all the relationship dynamics between the husband and his wife. The offer is very appealing and hard to refuse but when the couple has an agreement with the man they find themselves unable to stop and quit his next and next proposals. The book is divided into six chapters and the story is told from a third person's perspective but the reader still gets to know all the inner feelings and desires of the main character through the narrative.

This is a story that starts with the character being Robert and by the end of it is turned to Bobbi. A married sissy living in the closet but with one trip his life is changed and makes him come out and be accepted (and encouraged too) by his wife to be the true sissy he is. Bobbi Mare & Bob Neils did a great job with all the characters, showing their fear, insecurity, and vulnerabilities along with their excitement and sexual desires. What I love here that they have chosen to go with the feminization process gradually rather than just going for the whole thing at once. Douglas was an interesting character as well. He knew Robert was a sissy from inside. He sensed it. For Douglas this was a way to fulfill his own fantasy of sissifying another man that he sensed and knew was a sissy from inside, he wanted that man to come out and he worked his way towards it. In addition to that, he wanted to remove himself from this fantasy by fulfilling it. Once you fulfill a fantasy it will not be a fantasy anymore and this is what Douglas was trying to do. The story itself is fascinating and somehow reminds me of the movie Indecent Proposal which has a similar theme of a man approaching a couple with a proposal. They are similar there but the whole theme is totally different. Sissy Vacation Exposure should appeal to the wide audience of the erotica genre and especially to those who love to read about the feminization of men and get turned on by it. Besides having a great concept, excellent story, and interesting characters it also has very hot smutty scenes that will stay in your head for a long time.

Many thanks to the authors Bobbi Mare & Bob Neils for providing me a free copy of this book in exchange for this honest and unbiased review.

You have subscribed to alerts for Bobbi Mare.

You have been added to Bobbi Mare's favorite list.

You can also sign-up to receive email notifications whenever Bobbi Mare releases a new book.