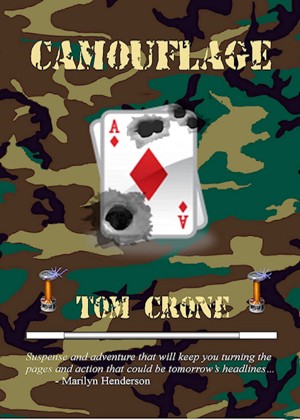 By Tom Crone
His father taught him magic. His country taught him to kill. Ex-HALO jumper, Vernon Washburn is an exciting new hero for the new century. When he “retires” and opens a restaurant that features up-close magic along with fine food, he discovers he must do one last job that requires all the skills he wants to forget and stirs memories of the woman he can’t forget. More
A flash of energy ripples at light speed across a mile of southwestern desert. It alerts watchers who have waited for it over half a century, and the race is on to possess the secret to the most powerful force ever created.
Vernon Washburn is a retired assassin, now seeking a return to normal life, but success with his lifetime dream is suddenly being torn from his hands, his life is threatened, and the bad guys are making a world dominating move that he alone can stop.
Now, two years into living his dream, he is forced back into action. His task; obtain four artifacts he and his Special Forces HALO team brought home from Bosnia. His new life is turned upside down, and friends lives are being taken.

Tom Crone is a lifelong devotee of magic and judo. He began doing magic as a young man, still performs professionally., He has written articles for Magic, Genii, and The Linking Ring. He is the author of Misdirection for Close-up Magicians.
He began judo in college in 1960, co-founded North Star Martial Arts Academy in 1985, and attained seventh degree black belt ranking. He teaches judo credit class at the University of Minnesota. He now also teaches judo at DOCS Gym in North Minneapolis.
He and his wife Shelley live in Minneapolis, Minnesota.

You have subscribed to alerts for Tom Crone.

You have been added to Tom Crone's favorite list.

You can also sign-up to receive email notifications whenever Tom Crone releases a new book.