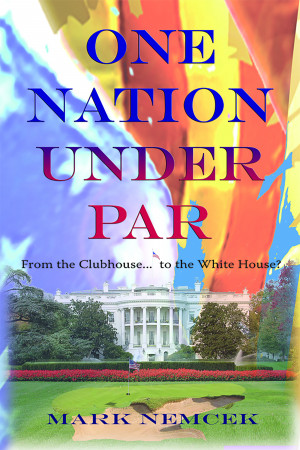 One Nation Under Par

By Mark Nemcek
Social media explodes when a million-dollar bet is placed on an honest but unknown golfer and his new hooker wife that he’ll win the presidential election by challenging all candidates to a lie-detector test of truth. If you could ask any presidential candidate a question while they're hooked up to a lie detector, what would you ask them? Find out in One Nation Under Par. More
If your choice for president was a dishonest and corrupt politician, or an honest semi-pro golfer whose gorgeous wife made money the old fashion way, and his campaign manager is a Las Vegas gambling talk show host, who would you vote for?

If you could ask any presidential candidate a question while they're hooked up to a lie detector, what would you ask them?

Mark Nemcek has spent much of his career in the high-tech marketing world, using his writing skills to craft articles for magazines, newsletters, web content and marketing collateral.

He has, however, adapted his unique and often humorous outlook on the world into words, writing short stories, poems, and song lyrics. This love of imaginative words, coupled with events such as 911, Katrina, and the poor view of US politics, inspired him to create One Nation Under Par, his funny and fictional novel about an unknown golfer who accidentally runs for president.

Nemcek has also authored a fictional music comedy entitled “Rock Race”, a fast read musical journey that rushes this modern day fab four towards their dream of playing music for a living. But Columbian drug lords, psycho girlfriends, the FBI, and amnesia are obstacles that this quirky, middle-aged rock band must overcome to win a major record contract and become famous rock stars.

Rock Race was created when he joined the Robert Goodman’s band in West Palm Beach, where he eventually recorded drum tracks on two albums. The band entered a music contest in Orlando, and the journey triggered the inspiration to create his humorous rock novel.

Playing drums since he was twelve, his love of playing was inspired by 1970's rock mentors such as ELP and Chicago. To relive his youthful magic, he often practices using his “old” albums and turntable. He still focuses on rock and roll, but enjoys jamming to jam bands like Phish.

Nemcek already adapted his successfully selling books into a screenplays. In addition, he’s already drafted additional books, and is presently working on two musical projects that combine his percussionist skills with songwriting.

Nemcek loves to write and tickle the fancy of his readers, whether its funny, technical, sales-minded or factual. His writing expertise delivers results. Nemcek has honed his proofreading and editing skills that establishes him as a true fictional – humorous - writing generalist.

You have subscribed to alerts for Mark Nemcek.

You have been added to Mark Nemcek's favorite list.

You can also sign-up to receive email notifications whenever Mark Nemcek releases a new book.