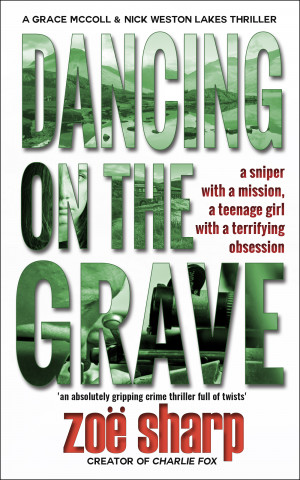 By Zoe Sharp
Dancing On The Grave is the first in a new crime thriller series set in the English Lake District: an absolutely gripping crime thriller full of twists. From the award-winning author of the Charlie Fox crime thriller series.
'A sniper with a mission… A young cop with nothing to lose… A CSI with everything to prove… And a teenage girl with a terrifying obsession…' More
In one of the most beautiful corners of England something very ugly is about to take place.

There’s a killer on the loose in the Lake District, and the calm of an English summer is shattered.
For newly qualified Crime Scene Investigator Grace McColl, it’s both the start of a nightmare and the chance to prove herself after a mistake that cost a life.
For Detective Constable Nick Weston, recently transferred from London, it’s an opportunity to recover his nerve after a disastrous undercover operation left him for dead.
And for a lonely, loveless teenage girl, Edith, it’s the start of a twisted fantasy—one she never dreamed might come true.

Formerly published as a standalone novel, this self-contained story is now the first in a three-book series. Book 2, BONES IN THE RIVER is published May 2020.

Praise for DANCING ON THE GRAVE and Zoë Sharp
“Dancing On The Grave is a dark, tense read that caught me off guard. The author takes us on an exhilarating ride full of twists and turns that had me clinging on to every word. Brilliant book and highly recommend it.” ~Sarah Hardy, By The Letter Book Reviews
“The quality of Sharp’s writing and the frequently changing points of view, all clearly contained within separate chapters, drive the story on at a relentless pace… Dancing On The Grave is a thriller that delivers on all levels. I found it impossible to walk away until I knew the end of the story.” ~Linda Wilson, Crime Review
“This is a straightforward, no holds barred, thriller. No one writes this kind of book better than Zoë Sharp. If you haven’t read one of her books before, the only question is ‘why not?’” ~Ted Hertel Jr, Deadly Pleasures Mystery Magazine
“This book is the perfect place to start if Ms. Sharp is a new author to you… The first chapter grabs you immediately, and you suddenly find yourself hooked.” ~Sara Weiss, Literal Addiction
“Ooooooh-eeeee! What an incredible treat it was to read this action-packed thriller! Set in Cumbria/the Lake District, the reader is taken on a whirlwind ride of retribution, fear, manipulation, vulnerability, conflict, truth, mental health issues, vengeance, lost souls and the search for the truth. I bloody LOVED it!” ~Noelle Holten, Crime Book Junkie

Reader reviews:
“One of those books which you read with increasing disbelief, thinking to yourself, I REALLY WISH I HAD WRITTEN THAT!”
“I hugely recommend this. If you’re off on your holidays it’s the perfect, action-packed page-turner.”
“A fresh take on the police procedural with a lot of keen observations.”
“A brilliant yarn.”
“I read books largely for their characters and this is what kept me turning the pages with this one (I read it in one night) and also what puts it a cut above your usual.”
"The landscape is almost a character in its own right.”
“Highly recommended!”
Available ebook formats: epub
Price: $2.99 USD
Buy Add to Library Give as a Gift
How gifting works
Create Widget
Tags: cozy mysteries medical thriller present day book 1 dark psychological thriller books domestic noir suspense feisty woman heroines lead detective action modern brit uk crime thriller kickass protagonist present time mystery novel vigilante justice series strong female fictional characters in literature tall strong women extraordinary situations top new crime scene novels domestic abuse fiction tough strong kickass female lead protagonist
About Zoe Sharp

Zoë Sharp was born in Nottinghamshire but spent her formative years living on a catamaran on the northwest coast of England.

After a promising start at a private girls' school, she opted out of mainstream education at the age of twelve. She wrote her first novel when she was fifteen and created her no-nonsense ex-Special Forces turned bodyguard heroine Charlie Fox after receiving death-threat letters in the course of her work as a photojournalist.

Sharp’s short stories have been used in school textbooks and turned into short films, and the Charlie Fox series has been optioned for TV and film.

Her work has been nominated for numerous awards both in the UK and the USA, and her short stories have been published in anthologies and magazines such as Ellery Queen Mystery Magazine and Strand Magazine.

A keen library supporter and public speaker, she blogs regularly on the acclaimed group website www.MurderIsEverywhere.blogspot.co.uk. She also witters on Twitter (@AuthorZoeSharp) and fools about on www.Facebook.com (ZoeSharpAuthor).

Zoë currently lives in the English Lake District. Her hobbies are sailing, fast cars (and faster motorbikes), target shooting, travel, films, photography, music, occasional construction projects and reading just about anything she can get her hands on.

You have subscribed to alerts for Zoe Sharp.

You have been added to Zoe Sharp's favorite list.

You can also sign-up to receive email notifications whenever Zoe Sharp releases a new book.