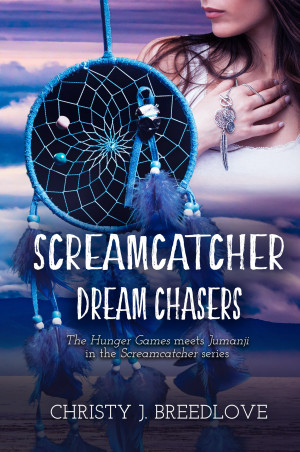 By Christy J. Breedlove
They were once considered Seekers in the dream world. Now they’ve become vigilantes and call themselves Pathfinders. Is it spiritual enlightenment they after? Or have they now become fatally reckless? More
Seventeen year-old Jory Pike knows a thing or two about Indian lore from her half-blood Chippewa ancestry. She can trap, hunt and fish with the best of them. She has a team of three other teens friends called The Badlands Paranormal Society. Instead of bagging groceries or playing on I-pods, they think they can excel at banishing evil spirits. They hope to cleanse houses and earn fat paychecks for their services.

Dream catchers aren't just the chic hoops tourists buy at novelty shops--they work. And sometimes they clog up with nightmares until they collapse under their own evil weight, imploding and sending the dreamer into an alternate world. Jory uses her worst nightmare to enter the dream catcher world. She’s pulled her teammates in deliberately. Everything goes right on schedule but they’ve bitten off more than they can chew. Now Jory and her friends are there, trapped between the people who have confessed their sins to the Great Spirit and are seeking a way out, and the monsters and evil spirits, which are happy to keep them trapped in the web world forever.

They were once considered Seekers in the dream world. Now they’ve become vigilantes and call themselves Pathfinders. Is it spiritual enlightenment they after? Or have they now become fatally reckless?
Available ebook formats: epub
Price: $2.99 USD
Buy Add to Library Give as a Gift
How gifting works
Create Widget
Tags: horror adventure action fantasy paranormal dreams nightmares portal young adults
About Christy J. Breedlove

Chris Stevenson, writing as Christy Breedlove, originally born in California, and moved to Sylvania, Alabama in 2009. His occupations have included newspaper reporter, front-line mechanic and federal police officer. He has been writing off and on for 36 years, having officially published books beginning in 1988. Today he writes science fiction, fantasy, paranormal romance, young adult, adult thrillers and horror. He has a total of 10 titles appearing on Amazon. He was a finalist in the L. Ron. Hubbard Writers of the Future contest, and just recently took the first place grand prize in a YA novel writing contest. He writes the popular blog, Guerrilla Warfare for Writers (special weapons and tactics), hoping to inform and educate writers all over the world about the high points and pitfalls of publishing.

You have subscribed to Smashwords Alerts new release notifications for Christy J. Breedlove.

You have been added to Christy J. Breedlove's favorite list.

You can also sign-up to receive email notifications whenever Christy J. Breedlove releases a new book.