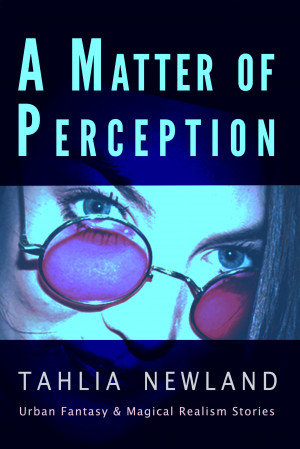 A Matter of Perception

By Tahlia Newland
Rated 4.00/5 based on 1 reviews
Take a journey into a world where the hidden becomes manifest and the lines between fantasy and reality blur. This collection of imaginative and entertaining stories about ghosts, sirens, light spectrum mages, realm hopping gods, alien monsters and ordinary people will warm your heart and make you smile, shiver, and maybe even wonder about the nature of reality itself. More
This book has been awarded a place on the Awesome Indies list of quality fiction.

Take a journey into a world where the hidden becomes manifest and the lines between fantasy and reality blur. This collection of imaginative and entertaining stories about ghosts, sirens, light spectrum mages, realm hopping gods, alien monsters and ordinary people will warm your heart and make you smile, shiver, and maybe even wonder about the nature of reality itself. The theme of individual perception as a result of our assumptions, beliefs and emotional experience bind these otherwise diverse stories into a unified whole.

Tahlia Newland has written and published eight books, three of which have won multiple awards. She writes inspirational and heart-warming magical realism and fantasy, and also makes masquerade masks and steampunk hats and accessories at http://tahliasmasks.com. Her wardrobe is full of steampunk clothing which she wears every day because beautiful clothes deserve to be worn.

She works as an editor for AIA Editing and AIA Publishing, a selective, author-funded publishing company, and lives in an Australian rainforest with a lovely husband and two cheeky Burmese cats. All her major books have a Burmese cat in them.

This book is a collection of short stories with a variety of themes and settings. I'll give each one a little attention so none of them feel left out. If you want to know the author's intentions in writing (which I always do), be sure not to skip her thoughtful explanation of the themes at the end.

The first story was a fantastic encounter between an unnamed photographer's assistant and The Gods. This fast-paced, thrilling glimpse into a bigger tale begins with a blow to the head, awakening new and fascinating senses and perceptions in the young woman, who then proceeds to get snarled up in a battle fought by James, a Drorgon Slayer and a god. An unexplainable attraction forms between the two and James seems determined to see where it will go. But can a regular girl and a god really find something that lasts?
This incredible tale has a fascinating take on gods and human mythology that I'd like to read more about. I enjoyed how the main character's disability, epilepsy, became an advantage, allowing her to see what regular humans couldn't, which was intriguing. The myriad of questions left unanswered led me to believe this was very much a preview for another book, The Drorgon Slayer's Choice. This short story made me curious about hearing more in the following book, but unsure just how many of my questions would be answered.

This is a chilling tale of supernatural creatures helping a woman trapped in tragedy, with a cruel twist ending. I enjoyed the emotion and the wildly imaginative supernatural characters, but felt left out here and there by abrupt or absent explanations.

Wizards battle with the power of colored light. Mistril and her apprentice Ealanor must bring wayward Damien to account for his crimes. This story feels like a segments from the middle of a larger story and I was forced to read and reread certain passages to understand what was happening. I truly enjoy the style of bursting information onto a reader, not boring us with endless explanation, but clarity can be compromised with this technique. Tahlia succeeded overall in pulling it off.

A Hole In The Pavement

Norris follows his Goddess, Georgia, on their way to the bus and through an obstacle course of neuroses turned real. I loved Norris' fragile sincerity and both characters sweet overcoming of their hang-ups. This was my favorite of the tales.

This story was a surreal switch off between an ancient world and modern. Is the main character an unwilling sacrifice to foreign gods, or a modern woman battling deadly cancer?
I liked the warmth and depth of this story, exploring the characters feelings facing death.

Sally is a chubby, frizzy-haired office girl, enjoys a new perspective on her coworkers with some fantastic glasses. Through them she sees new depth in others and possibly love.
This story was full of rich description and challenged me to see beyond first impressions. Tahlia's writing is very loving.

Tahlia's tales were vivid and rich. Her characters are deeply real, as if she is writing about people she knows, not making up individuals. They learn deep and vital lessons in each of the stories.
The first three stories felt a lot like excerpts from larger stories while the final three were true short stories, encompassing the entire subject on their own.
I thoroughly enjoyed all the stories, especially the daring honesty of her emotions. There were a few ungainly expressions and descriptions, with people and events thrust in with little explanation, which became confusing at times. On the other hand, it contributed to the thrill of her writing and the attraction of the story. Not once was I bored with too much explanation, which is a problem in a lot of writing I've read lately. Tahlia has a unique, charming style that is bold, honest, and thrilling. I feel like I know her after reading her work.

You have subscribed to alerts for Tahlia Newland.

You have been added to Tahlia Newland's favorite list.

You can also sign-up to receive email notifications whenever Tahlia Newland releases a new book.