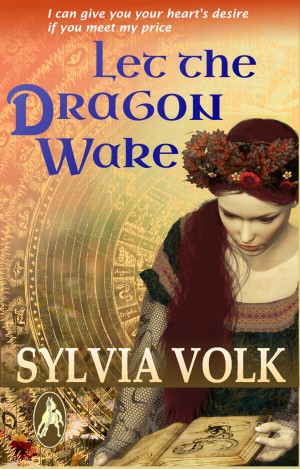 Sylvia Volk was born in western Canada to a family of readers; fiction followed. First she read it, and then (starting in elementary school) began making up her own. Somewhere along the way she ran out of available fiction and started reading nonfiction as well, and ended up learning about esoteric things - Arab horses, fractal structure of story, ancient-world military history, the mythology of beekeeping, the vanished kingdoms of the Himalayas and other such trivia. She writes esoteric books, and is beginning to suspect she's wrecked her eyes with too much reading. 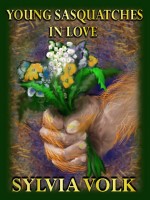 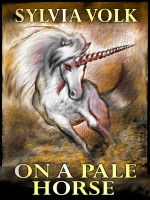 The lyrical beauty created in this world is outstanding. Add to that a group of well-drawn characters, a plot that is totally different from anything written before and you have a fantastic read.

The characters aren't drawn as perfect people. They are flawed and they must grow as the story progresses, as it does to a startling and satisfying conclusion. Highly recommended.

Welcome to a world where flowers are grown for the lower classes and made for the wealthy, by magic, along with birds and sunlight and blades of grass; where a soldier is, literally, married to his blade; where Fate is king and almost all-powerful. The first thing I thought on firing up the Kindle was that the writing was sheerly gorgeous, thickly embroidered with metaphor and simile like nothing else I've read … and I wondered whether it would pall after a while.

It didn't. There were one or two similes that landed with a thud, but for the most part it succeeded at a grace as light and playful and attractive as the cats that populate the story.

… the first room was a workshop with a counter and display-shelves, and what it sold was obviously dust…

… something painted by a madman on parchment of human ears….

Wyrdrake, driven by a deep need he can barely put words to, goes to King Fate to request a bride. I'm not sure if his freedom to do so is because of his position, or because the land is more egalitarian than most. It is known abroad that not only can Fate and his people create such things as birds and butterflies, he can also create a bride upon demand – and in fact has done, although that lady upon facing her impending marriage determined that she wanted Fate, not her intended husband. The bride can be made – the love cannot. And Fate's apprentice, Marr, wants more than he has. And thereby hangs a tale.

The city where this story is set took some getting used to. "Sondolattis, city of marvels, whose people lived with heaven in plain sight. With mundane magic, and commonplace wonders. They lived so long that they mastered their daily work, and then went beyond mastery and became miracle-workers." It's not only that there is magic there – it is magic. It is built largely of dragon bone, and rests on the back of another enormous dragon, sleeping in the lulled peace of having been married to King Fate long ago. This is the key to keeping the dragon docile and still: she has been given husband after husband through the long years … and that is definitely one of the things that took getting used to. There are, in Sondolattis, two sorts of marriage: the familiar kind between a man and a woman, and this kind, the second marriage, in which a person is bound in devotion and loyalty to … something. It could be a soldier married to his sword, or a guard married to the gate which is his post, or a scholar in a clock tower married to Time.

Somewhere along the way, though, the strangeness fell away, and the city made its way under my skin, and it all seemed perfectly right and natural. Let the Dragon Wake is a novel (or novella)-length fairy tale. It makes no attempt to explain logic away its improbabilities and impossibilities, but lets them glimmer and shine in their setting of dragon bone. It is beautiful and unexpected and harsh and sweet. It's a gem.

While looking for something different to read the description for this caught my eye, I was intrigued. After the first page I was hooked, after the first chapter I was entranced, but also harbored a secret fear that the lush, literary writing wouldn't be able to hold true for the hundreds of virtual pages of this novel. My fears were proven unfounded.

For those who say fantasy cannot be literary I put forth this amazing work as the proof that would invalidate their arguments. For those who say that e-books aren't 'real books' and must be of a lower quality because they didn't kill a tree to be read, I challenge them to read this book on a green device and still argue the same.

Let the Dragon Wake may be fantasy, but if you strip away the magic, it stands at its heart a story about simple people, complicated fates, and most importantly love. What does it mean, where do they find it, what will they do for it and to protect. It's also a story about the absence of love, the cost of loving and loosing, or of never knowing. From the fall of a single man to the city resting on the back of a dragon built tall enough to literally see heaven's gates. Under the skilful hand of this author the reader is given the chance to glimpse a world where magic is both fantastical and mundane, and where every breath, while unlikely to be your last, is certainly the beginning of something new.

Best book of the new year. A rare five star creature, I would offer this up to any fantasy fan looking for something magical.

This was a very well written book with a great story line. I enjoyed it completely from start to finish. Anyone who likes a book that flows and never seems to hit a hiccup will love this book. I wonder if this may become a series, I hope so as it was that good.
Very good read for any one, although there is some detail not suitable for very young children, not much, but some. Read this book and I think you will love it as I did.

The cover was reasonably pretty and the blurb read like the kind of thing I'd love to cuddle up with after I finished reading my latest giggle-a-minute bodice-ripper. So I got it for $2.99, read the first few pages, and was absolutely and definitively floored. This wasn't a bodice-ripper. This was on such an entirely different plane of existence, it was like getting Grade-A Ambrosia when all you really asked for was a tall, cool glass of frothy Starbucks.

We start out with the linguistically-playfully named Wyrdrake. Honestly, that name is like one of those exquisite clockwork boxes that you open up and unfold, only to find more exquisite little boxes inside. For example:
1) There's "wyr" or "were" for "man" -- like in the man/wolfy sense of the "werewolf" -- and there's "drake" for "dragon".
2) Similarly, we could associate it with "mandrake" for bonus aphrodisiac properties, or the image of a man engaging in solitary love (since good old Wydrake's sort of loveless when his story starts out).
3 ) Or try out the concept "Wyrd" for "Fate" (since there's a lot of fate going on here).
4 ) Or even "wyrd" for "word" (since our protagonist lives in, of all places, a Fantastical Magical Library located at the very tippy-topmost tier of a magical city).

We start out with Wyrdrake getting a message from King Fate, which effectively agrees to fulfill his one lifelong wish: Yes, I'll go ahead and make you the perfect wife. King Fate is a sort of god/king, and he can apparently marry anyone to anything. He can marry a person to, say, a shower of gold or a bowl of soup, and he once even married a whore to a flight of stairs (it was possibly a very attractive flight of stairs, considering that it's located in the very glamorous city of Sondolattis, which is stuffed so full of beauty and personality and miraculousness, it really wouldn't be any hardship to take it to bed).

Everyone is a magician here, but King Fate is the canniest magician of all. He agrees to produce a wife for lonesome Wydrake, but it comes with a condition. And what a condition it is!

The story rushes along with the creation of the beautiful Dovizel as she grows up with some definite ideas of her own about love and the giving of it. She and Wyrdrake engage in a charming tango of a courtship, involving soulful cats and celestial books and a gaggle of lovable sisters.
Along the way, we witness the growing jealousy and pettiness of King Fate's self-important apprentice Marr, and the arrival of a villain whose powers deal in Capital-M Magic and a most perverted and noxious kind of love. A word of warning: this villain pulls no punches, and has some genuinely gut-churning scenes. It could get harrowing. At time, the darkness and depravity burn almost as intensely as all the light and beauty in this book -- but "almost" is the operative word.

I have to admit, though, that the plotting could have been tighter. The book tended to go on captivating tangents, following after pretty but unnecessary things. Like this review, in fact. There were a few instances when my attention wandered slightly, and I didn't have any of those whoa! moments that the very sneakiest authors could spring on you at the climax, when all the plot points come together with a great big bang.

But this is a book with its heart in the right place. And its mind too. It has ideas upon ideas. It has all sorts of rollicking literary allusions (which aren't absolutely essential to understand, but are fun to pick up and collect). It makes a distinction between magic and Magic, which I think is -- more than epic battles between Good and Evil -- the single most important subject of fantasy fiction. And ultimately, it's a book about love (and all the different faces of "marriage"): and love is the single most important subject for books, and people in general.

You have subscribed to alerts for Sylvia Volk.

You have been added to Sylvia Volk's favorite list.

You can also sign-up to receive email notifications whenever Sylvia Volk releases a new book.