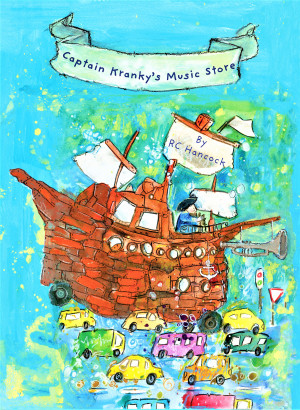 By Robert C. Hancock
This is about a former band leader whose band played down at the docks where ships were launched. He always wanted to be the captain of one of those ships. To fill this hole in his heart he built a music store in the shape of a ship. He soon learned that it wasn’t that much fun without a crew to command. So, he hired a young boy named Christopher who soon realized what a strange place it was. More
At first blush, this is a children’s book, but really, it’s for everyone. It’s about a former band leader whose band played at ship launchings down at the docks. Even though his music celebrated the birth of new boats, Kranky was unhappy because he always wanted to be a sea captain on one of those boats.
To fulfill this need, he built his music shop to look like a ship. Even though it didn’t float and was anchored in the street, It didn’t matter to him for he was now a one-hundred percent sea captain.
He soon found that without a crew to command, it just wasn’t that much fun. A small boy, Christopher, came to the shop to get his flute repaired, and was immediately enlisted as the First Mate. Over time Christopher realized Kranky was a real crank and the shop did not make him happy. Ultimately, Christopher, armed with his happy flute, helped Kranky find his own tune and discover happiness.
Available ebook formats: epub mobi pdf lrf pdb txt html
First 15% Sample: epub mobi (Kindle) lrf more Online Reader
pdb
Price: $4.99 USD
Buy Add to Library Give as a Gift
How gifting works
Create Widget
Tags: child teaches adult learning what is important positive timeless story
About Robert C. Hancock

Robert Hancock and his wife Marianne, until late, lived in a very old, very large house in southeastern Massachusetts.This provided him with an ample “To do list,” and it is with personal pride that he did not let this three hundred year old house fall down during his watch.
Though it is still officially winter, outdoor tennis is "game on". As a senior citizen, he is now dedicated to doubles tennis where he has staked out a small area of the court, formerly dubbed his: “Area of Responsibility” from which he has vowed never to stray. That pressure proved to be too great and he has since downgraded that area to the “Cone of Concern”. He's concerned, but not actually responsible. Once he gets accustomed to playing in a full hazmat suit, he could be a force to be dealt with.

You have subscribed to alerts for Robert C. Hancock.

You have been added to Robert C. Hancock's favorite list.

You can also sign-up to receive email notifications whenever Robert C. Hancock releases a new book.