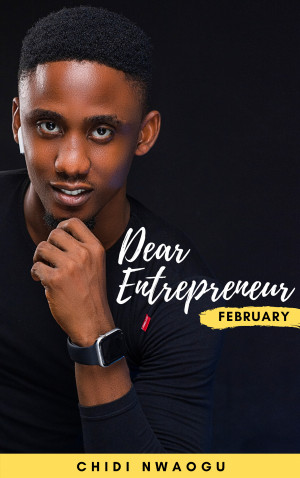 By Chidi Nwaogu
On April 2, 2019, Jason Njoku, a Nigerian entrepreneur tweeted about how entrepreneurship abuses and consumes us if we let it. This is nothing but the truth.

This book should serve as a devotional for entrepreneurs looking for a companion along their entrepreneurial journey. It will come in twelve volumes, from January to December; a letter for each day.   Start your day by reading one letter. More
On April 2, 2019, Jason Njoku, a Nigerian entrepreneur tweeted about how entrepreneurship abuses and consumes us if we let it.

This is nothing but the truth.

Entrepreneurship isn't glamorous at all, and often it affects our mental health. However, in contrast to Njoku's opinion, I believe there is true happiness in entrepreneurship if we share our pains, mistakes, worries, failures, and shortcomings with other like-minded entrepreneurs, and receive feedback and help from them, and grow from there.

In a bid to achieve this, I started a podcast for entrepreneurs called "Dear Entrepreneurs” in April 2019.

Olamide Akomolafe, a colleague, and I anchored this podcast in Accra, Ghana, from April to July 2019; recording eight episodes within three months. In each episode, we talked about our experiences as entrepreneurs, the good, the bad, and the ugly, in order to encourage other entrepreneurs going through tough times.

We garnered hundreds of listeners from Nigeria, Ghana, Kenya, Canada, Germany, United States, and Mauritius, but had to discontinue the podcast, unfortunately, after the eight-episode, as Olamide and I flew out of Ghana and began living several timezones apart.

In December 2019, I somewhat rekindled the podcast, as I began posting across my social media profiles, a series of open letters to entrepreneurs. Since then, I have written and posted over 100 letters and counting.

All letters begin with “Dear Entrepreneur…” and closes with “With love, Chidi”.

In March 2020, I decided to collate all letters already posted online and to be posted, into a book called “Dear Entrepreneur”.

It should serve as a devotional for entrepreneurs looking for a companion along their entrepreneurial journey. It will come in twelve volumes, from January to December; a letter for each day.

My hope is that you start your day by reading one of the letters, and it helps you put everything into perspective.

Chidi Nwaogu is a serial tech entrepreneur, self-taught software developer, public speaker, volunteer mentor, and startup advisor. Nwaogu started his entrepreneurial journey when he was 16 with the creation of 9ja Boi Interactive, a video game development company that combined AI and gamification to teach fellow teenagers the concept and importance of global warming, and how to mitigate it.

Today, Nwaogu is the Co-founder and CEO of Publiseer, a digital platform helping independent and underserved African writers, musicians, and filmmakers, earn above the minimum wage and live above the poverty line from the sales of their creative works. Publiseer has been described by Konbini as "one of the largest digital publishers in Africa", identified by IFC as one of the startups "that could speed up innovation in Africa", listed thrice by ModernGhana as one of the top "African Innovations" in 2019, and by Opera as one of the “5 Made In Nigeria Companies That Are Giving Nigerians So Much Value In 2020”.

Since Nwaogu was 19, he has co-founded, grown and sold two tech startup companies, including LAGbook, a social network that garnered over 1-million registered users within three years from inception, and was eventually acquired by the Canadian tech company, Gulf Pearl Ltd.

Nwaogu has been described as one of the "Young Innovators making Africa great in 2019" and "50 Top Personalities on LinkedIn". Nwaogu began public speaking as a keynote speaker at the 2012 IT Leaders West Africa Summit, where he spoke on the role of social media and mobile in developing nations, focusing on the Arab Spring. Today, he speaks around the world about publishing, entrepreneurship, business, and technology, including at the 2019 International Publishers Association Regional Seminar in Nairobi, the 2019 Geneva Book Fair in Switzerland, the 2019 Legal & Tech Network Summit in Lagos, and the 2019 African Magnates Summit in Accra.

As a volunteer mentor, Nwaogu mentors budding and aspiring entrepreneurs and young professionals through platforms like the Lagos Innovates Idea Hub by the Lagos State Government, and the Investment Readiness Program by the United Nations Sustainable Development Solutions Network. Nwaogu's startups have been featured on several media publications, like Africa Business Review and TechCrunch, for their many strides in the tech ecosystem.

For his contributions to the growth of the tech ecosystem in Africa, Nwaogu has won the 2019 Africa 35.35 Award for Entrepreneurship, the 2019 Young Leaders Award for Media and Entertainment, and the 2019 Bizz Business Excellence Award. Nwaogu is an Acumen Fellow 2020 (West Africa), Halcyon Incubator Fellow 2019 (Washington DC), Westerwelle Fellow 2019 (Berlin), and Yunus&Youth Global Fellow 2019 (New York).

You have subscribed to alerts for Chidi Nwaogu.

You have been added to Chidi Nwaogu's favorite list.

You can also sign-up to receive email notifications whenever Chidi Nwaogu releases a new book.