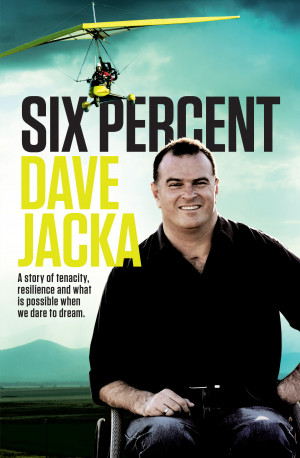 By Dave Jacka
Just because someone reckons you can’t do something, doesn’t mean it can’t be done.

In Six Percent, Dave Jacka tells the story of his journey from immobility in an ICU ward following a devastating motorbike accident, to realising his boyhood dream of learning to fly. More
Just because someone reckons you can’t do something, doesn’t mean it can’t be done.

In Six Percent, Dave Jacka tells the story of his journey from immobility in an ICU ward following a devastating motorbike accident, to realising his boyhood dream of learning to fly.

Upon discovering he has six percent of his muscles functioning, nineteen-year-old Dave becomes obsessed with finding out what six percent actually means. Does it mean he will have six percent of a life?

Six Percent takes us inside Dave’s mind as he reckons with his fate and begins to reimagine his future. Overcoming despair, daily frustrations and interminable obstacles, Dave’s perseverance and philosophy of ‘doing it differently’ enable him to progress from relearning how to feed himself to competing at the 1996 Paralympics. He then defies expectations and realises his ultimate dream—learning to fly.

Told with humour and insight, Six Percent is a remarkable story of tenacity and resilience—and what is possible when we think laterally and dare to dream.
Available ebook formats: epub mobi
Price: $7.15 USD
Buy Add to Library Give as a Gift
How gifting works
Create Widget
Tags: determination disability challenge quadraplegic wheelchair barriers innovations flying a plane goals setting resiliance
About Dave Jacka

When Dave Jacka was nineteen, he broke his neck in a motorbike accident, leaving him with quadriplegia and six percent physical function. For the rest of his life, Dave would be in a wheelchair—paralysed from his armpits down, with limited arm function, no use of his fingers and unable to regulate his body temperature. For the former surfer, snow-skier and carpenter, this was utterly devastating.

Dave's remarkable journey of rebuilding his life began relearning how to feed himself, to driving a car and retraining in engineering. He then worked as a project manager, represented Australia in wheelchair rugby at the 1996 Paralympics, and eventually fulfiled his boyhood dream of learning to fly.

Dave has achieved each milestone by applying his remarkable mindset and philosophy. Instead of viewing obstacles as impenetrable barriers, Dave frames them as opportunities—opportunities to think laterally, devise solutions, overcome frustration—by doing it differently.

By custom-designing modifications to his recreational aircraft, in 2013 Dave became the first person with quadriplegia to fly solo around Australia.

In 2014 Dave was a Victorian finalist for the Australian of the Year and was awarded an Order of Australia Medal for his contribution to people with a disability through sport.

In 2016, Dave modified a sea kayak, taped his hands to the paddle and paddled the 2226km length of the Murray River—thereby achieving another world first.

Dave is married, has a dog and a cat and always has his eye on his next big adventure.

You have subscribed to alerts for Dave Jacka.

You have been added to Dave Jacka's favorite list.

You can also sign-up to receive email notifications whenever Dave Jacka releases a new book.