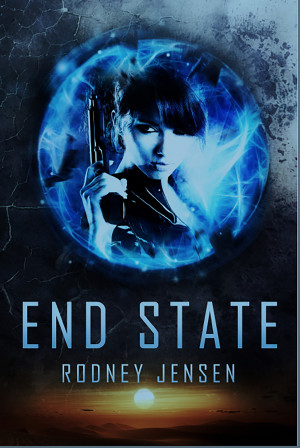 “If one is looking for a fast paced who-dunnit then End State is for you.”
Guy Hallowes, Author No Happy Valley

“End State will keep you engaged to the surprising final page. It’s a crime thriller, perhaps bush noir in the Jane Harper and Chris Hammer vein, but with a sci-fi twist.”
Leonie Henschke, Journalist, Writer, Editor

“End State … takes you on a journey through the Adelaide Hills, Sydney, onto Indonesia and its stormy relationship with Australia.”
Andy McGee, Author Sublime Murder

‘An unexpected turn towards the end of the book takes the story further into science fiction territory and leaves you wanting to know what happens next.’
Gillian Noble, Owner, The Washhouse Gallery

Rodney Jensen attended Wellington College in Britain and St Peters College in Adelaide Australia. He completed graduate and postgraduate studies at universities in Adelaide, Perth, London and Sydney. His PhD analysed the ability of creative industries to enhance city environments and economies.

During the past decade Rodney has focused on the media and creative writing and has published a number of novels and short stories, including:

“The Nursery Attendant and the Duct Maintenance Droid”, short story published in “Of Beasts and Butterflies”, anthology, 2019.

“Countdown at Quarry Lake”, short story published in “A Noise on an Island”, anthology, 2018.

“The Final Journey”, short story published in “A Fearsome Engine”, anthology, 2016. Rodney has also published news and editorial as a freelance journalist for The Australian, The Sydney Morning Herald, and Australian Property Investor Magazine. He has received several merit awards from the Planning Institute of Australia for “Cityscape” (a collaborative newsletter) and a documentary film on the heritage of Wentworth in NSW.

You have subscribed to alerts for Rodney Jensen.

You have been added to Rodney Jensen's favorite list.

You can also sign-up to receive email notifications whenever Rodney Jensen releases a new book.