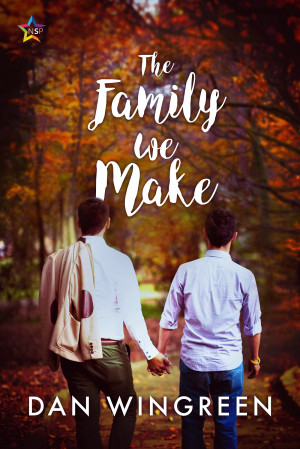 The Family We Make

Tim Ellis’s life is falling apart around him. After four years of hard work at college, he finds himself blacklisted from the career of his dreams by the professor he refused to sleep with and abandoned by the boyfriend he thought he was going to marry. Even though he was lucky enough to land a job at a bakery, he still feels like a failure.

Tim and Spencer’s first meeting is filled with turbulent misunderstanding, but Tim makes a connection with Connor through a Big Brother/Big Sister program, and both men put aside their mutual dislike for his sake. By letting go, they may help each other find their way into a life they never could have imagined.
Available ebook formats: epub mobi pdf lrf pdb txt html
First 20% Sample: mobi (Kindle) lrf pdb Online Reader
Price: $6.99 USD
Buy Add to Library Give as a Gift
How gifting works
Create Widget
Tags: romance family drama gay lgbt teacher contemporary humorous
About Dan Wingreen

Dan lives in Ohio (as people do) with his husband and the most adorable little rescue dog ever. His three favorite things are The Empire Strikes Back, winter, and RPGs. His least favorite thing is pizza. Since the age of twelve, it’s been his dream to write something good enough to get published and, after over a decade of unforgivable procrastination, he actually managed to get it done. Thankfully, what he finally ended up writing turned out much better than the Spider-Man and Eminem fan fiction he wrote in sixth grade. His new dream, which will hopefully take less time to achieve, is to own two Netherland Dwarf bunnies named Bunnedict Thumperbatch and Attila the Bun.

Reviews of The Family We Make by Dan Wingreen

You have subscribed to alerts for Dan Wingreen.

You have been added to Dan Wingreen's favorite list.

You can also sign-up to receive email notifications whenever Dan Wingreen releases a new book.