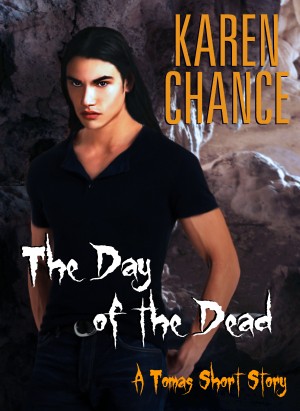 The Day of the Dead

Tomas is out of Faerie and his thoughts still center on the same thing that sent him into hiding in the first place. Kill Alejandro.

While on his way to do so Tomas encounters a Jinx who is hunting for Alejandro as well, she is trying to save her brother from becoming just another hunted human in Alejandro's sick games. Unable to convince her that she is in over her head, Tomas finds himself storming the underground safeheaven of the leader of the Latin American Senate with a handful of humans as back-up.

This a free story from author. It's a fun short story with Tomas as the main character. The story is a fun action pack story. I like these short stories because you get a little more info about some of the side characters.

Day of the Dead is a very short story that gives us some insight into Tomas and his background. I loved getting to know more about him and why he hates Alejandro so much. I loved the setting and the tidbits about the ancient Incan and Mayan cultures. And we’re introduced to a few more characters that the Silver Circle says have “illegal talents”. A great addition to the Chanceverse!

this author has an interesting collection of books

awesome, finaly some more about tomas, i love it. thanks so much for this short Story!!! :)

Very powerful story, I loved it, short story however very entertaining. Another good read is A Synthetic Illusion by Christian Clarke, I think smashwords has the best selection of authors

I love her books & stories & this one was great!

The story is powerful, adventurous and astrological.

Tomas was first introduced to us as a minor character in 2006's [book:Touch the Dark|67513], in [book:The Day of the Dead|7623711] he is now on the run intent on putting an end to his evil maker Alejandro. While in a local tavern on his way to confront the Master Vampire he encounters a mysterious young woman who is trying to find her missing brother. The story while short is tense and action packed, one of the finer examples that a book does not have to be 300-400 pages long to give you immense satisfaction and a great look into Tomas's background and current circumstances. The ending leaves the reader cheering Tomas and wishing he had a bigger part to play somewhere in the full length books in the series. (free e-read from Smashwords and also on the author's web site.)

You have subscribed to alerts for Karen Chance.

You have been added to Karen Chance's favorite list.

You can also sign-up to receive email notifications whenever Karen Chance releases a new book.