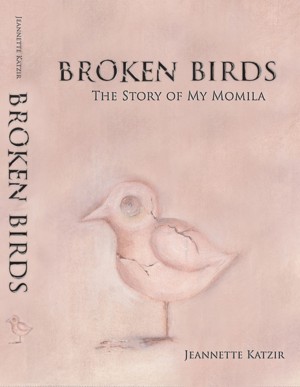 Broken Birds, The Story of My Momila

By Jeannette Katzir
World War II has long since ended,and yet Jacyln and her siblings grow up learning to survive it.Having lived through the Holocaust on the principle of constant distrust, their mother, Channa, dutifully teaches her children to cling to one another while casting a suspicious eye to the outside world.When Channa dies the contents of her will will force her children to fight . . each other.
Available ebook formats: epub mobi pdf rtf lrf pdb txt html
First 25% Sample: epub mobi (Kindle) lrf more Online Reader
pdb
Price: $6.99 USD
Buy Add to Library Give as a Gift
How gifting works
Create Widget
Tags: world war ii family holocaust jewish sibling rivalry concentration camps partisans brothers and sisters
About Jeannette Katzir

Having discovered firsthand how the shadow of the Holocaust extends into the generations that follow, I have devoted recent years of my life to the study of the subject. Before my mother’s death, I gathered as much information as she was willing to share. After her death, my father revealed the details of his own story—details that my mother had always forbidden him to tell his children, fearful of the effects the truth would have on us. The stories I learned from my parents were accentuated with documents, photographs, and an enlightening journey with my father to the places of his childhood, imprisonment, escape, and liberation.
To gain insight into the effects of the Holocaust and understand the psychological impact that my parents couldn’t or wouldn’t explain, I turned to the testimonies of other survivors and opened up conversations with my fellow second generation survivors.
I wrote my book from this research, along with continued dialogue with experts on the subject of sibling rivalry (see endorsements below). The process of writing has also involved development of a web a presence and a presence in the Jewish community. Most recently, I have been invited to speak at the Holocaust Memorial Center in Orlando, Florida at the beginning of next year.

Reviews of Broken Birds, The Story of My Momila by Jeannette Katzir

You have subscribed to alerts for Jeannette Katzir.

You have been added to Jeannette Katzir's favorite list.

You can also sign-up to receive email notifications whenever Jeannette Katzir releases a new book.