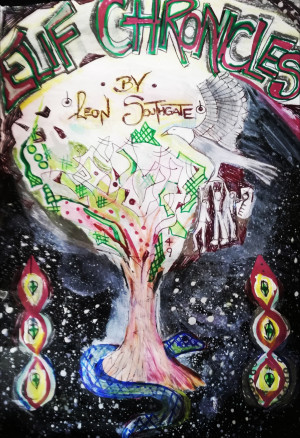 By Leon Southgate
Rated 4.00/5 based on 1 review
Danny and Abhay are two psychic, disabled kids living in supported care in Liverpool. Join them in their battle against the evil space creature the Elif, the top secret PSI agency and its sinister leader, Alistair B. Civil. They befriend assorted spirits and inter-dimensional entities as they travel through dimensions and towards the end of the world! A fantasy sci-fi novel for 14 yr olds upwards. More
Danny is a disabled teenager. He just wants a body that works and a girlfriend. What he gets is a part in a dirty inter-dimensional war.
Alistair is Danny’s ‘employer’. He is the congenial officer of a secret psychic agency. His best friend is the evil space entity, the Elif. He doesn’t have Danny’s best interests at heart, or much of a heart for that matter.
Danny and Abhay are just two psychic teenagers caught in the cross-fire between warring inter-dimensional factions with no way out. In this game everyone works for someone, or something else. Danny has few friends to rely on apart from his best friend Abhay, a young librarian, a gang of assorted spirits and some rather intellectual animals.
The Earth herself is under attack and Danny isn’t anyone’s idea of a hero...
Download: epub mobi (Kindle) pdf more Online Reader
lrf pdb txt
Price: Free! USD
Add to Library
Create Widget
Tags: lifeforce akashic field spirit animal interdimensional alien
About Leon Southgate

My interest in what I now call 'life-force', 'orgone' or 'qi' probably started when I was still a child. My dad had a psychotherapy library with most of Wilhelm Reich's books. I think Peter Reich's, 'A Book of Dreams,' caught my eye and started my interest in orgonomy (Peter was Wilhelm's son). Orgonomy is the science of life-force named after orgone, Reich's term for this energy. At a deeper level orgone is a force rather than simply an energy but that is another story.

I did not know what I wanted to do till much later in life. Music seemed a good idea. A soul/pop type band that I was a part of in Liverpool broke up just as we were about to be signed to Sony - after many years of hard slog. I had also trained as a nurse so after the music folded I went back to this occupation. Eventually I trained as an Chinese medical acupuncturist.

Then at the end of the acupuncture course we were offered the chance to do a Master's research degree. Someone, or something sparked my childhood memory of Wilhelm Reich's work. I decided to to a research degree looking at the common foundation of Reich and Chinese medicine. Little did I know then what I had taken on. It was gruelling both in terms of work and from the sheer opposition I encountered. From this came a controversial and ground-breaking practical and theoretical study which became my first published book (look me up on Amazon to find it).

I have a leaning toward academia and I love fiction, quiet music and mountains. Neil Gaiman and Anthony Horowitz are amongst my favourite mainstream authors. I also love neo-classical piano and new age music. My favourite musician at the moment is Fabrizio Paterlini. I will be forever grateful for being introduced to his work. It is so beautiful and so melancholy, its wonderful! Ludovico Einaudi is a big influence and Andreas Vollenweider, is also very important to me, especially his 1980's pre-Jazz era. Around the same time that I discovered an academic side to me I started writing fiction. I tend to lean towards young adult science fiction/fantasy my writing. SpiritRunner is my first novel. I am interested in geo-politics, spiritual, cosmic and paranormal phenomena. Richplanet.net is a good jumping off points on those subjects. My own website leosouthgate.com has links to my research work on life-force (orgone) and its links to acupuncture (see my book on this area too based on my MSc). There is a cross referenced annotated bibliography of the post-Reich research literature available from the website or from here on smashwords.

There is a lot of imagination in this work, something different is always happening,

The in universe plausibility is good.

The language is European English, so a bit bumpy in place for American readers, but not off putting.

You have subscribed to alerts for Leon Southgate.

You have been added to Leon Southgate's favorite list.

You can also sign-up to receive email notifications whenever Leon Southgate releases a new book.