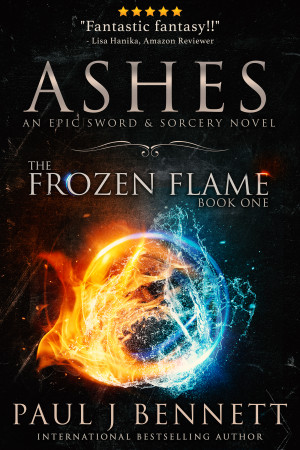 By Paul J Bennett
Magic is the key, but will it save them… or consume them?

For Natalia, there is no choice, while Athgar's life is about to change forever.

Now, one seeks safety and the other revenge as they search for the truth before their enemies destroy them!

Discover a land infused with magic and mystery in Paul J Bennett's newest book, Ashes. More
Magic is the key, but will it save them… or consume them?

For Natalia, there is no choice.
Trained as a battle mage, she has the potential to be the most powerful spellcaster the family has ever produced. Yet their price is too high!

While Athgar's life is about to change forever.
On the day his village is burned to the ground, his magical potential is released by the very fire that nearly consumed him. He is driven by revenge until he learns he may not be the only survivor!

Now, she is on the run from her family, while he desperately hunts for his!
Together, they journey across the continent, searching for clues of a conspiracy that has remained secret for years. Will their enemies destroy them before they discover the truth?

Discover a land infused with magic and mystery as Paul J Bennett's newest series, The Frozen Flame, begins in Ashes.

Curl up with your copy of Ashes, and enjoy a spellbinding tale today!

Paul J Bennett (b. 1961) emigrated from England to Canada in 1967. His father served in the British Royal Navy, and his mother worked for the BBC in London. As a young man, Paul followed in his father’s footsteps, joining the Canadian Armed Forces in 1983. He is married to Carol Bennett and has three daughters who are all creative in their own right.

Paul’s interest in writing started in his teen years when he discovered the roleplaying game, Dungeons & Dragons (D & D). What attracted him to this new hobby was the creativity it required; the need to create realms, worlds and adventures that pulled the gamers into his stories.

In his 30’s, Paul started to dabble in designing his own roleplaying system, using the Peninsular War in Portugal as his backdrop. His regular gaming group were willing victims, er, participants in helping to playtest this new system. A few years later, he added additional settings to his game, including Science Fiction, Post-Apocalyptic, World War II, and the all-important Fantasy Realm where his stories take place.

The beginnings of his first book ‘Servant to the Crown’ originated over five years ago when he began running a new fantasy campaign. For the world that the Kingdom of Merceria is in, he ran his adventures like a TV show, with seasons that each had twelve episodes, and an overarching plot. When the campaign ended, he knew all the characters, what they had to accomplish, what needed to happen to move the plot along, and it was this that inspired to sit down to write his first novel.

Paul now has four series based in his fantasy world of Eiddenwerthe, and is looking forward to sharing many more books with his readers over the coming years.

About the Series: The Frozen Flame

Follow the adventures of two mages from completely different backgrounds as they realize they are more powerful together than as individuals.

Also in Series: The Frozen Flame

You have subscribed to alerts for Paul J Bennett.

You have been added to Paul J Bennett's favorite list.

You can also sign-up to receive email notifications whenever Paul J Bennett releases a new book.