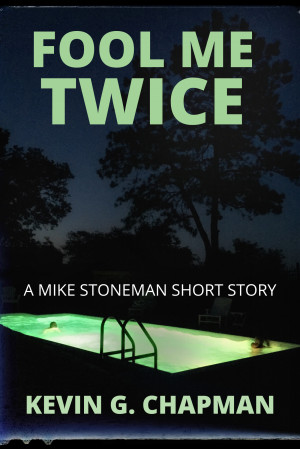 The short story that launched the award-winning Mike Stoneman Thriller series. More
Fool Me Twice is the short story where NYPD homicide detective Mike Stoneman first appeared in print. The story was written as an entry for a short story competition in 2012, where it won first prize. Later, Mike Stoneman became the primary protagonist in the Mike Stoneman Thriller series of novels, beginning with Righteous Assassin: A Mike Stoneman Thriller in 2018. In the short story, Mike investigates the death of a wealthy businessman, who is found dead in his swimming pool. Mike gets the story from his teenage debutante daughter, who explains that her father was chasing her and beating her after an argument. It was an accident that he fell into the pool and hit his head. Mike believes the story. Years later, the same woman calls the police to the same swimming pool, where her abusive boyfriend is dead. Mike has to decide whether the second death is just a coincidence – or is murder. Can Mike separate his sympathetic memories of the battered teenager from the facts? And can he resist the feminine wiles of this beautiful woman?
Download: epub mobi (Kindle) pdf more Online Reader
lrf pdb txt
Price: Free! USD
Add to Library
Create Widget
Tags: thriller crime murder short story detective new york consequences philosophical
About Kevin G. Chapman

Kevin G. Chapman is an attorney specializing in labor and employment law and in independent author. His current project is the Mike Stoneman Thriller series. Righteous Assassin (Mike Stoneman Thriller #1), was named one of the top 20 Mystery/Thrillers of 2019 by the Kindle Book Review and is a finalist for the Chanticleer Book Review CLUE award. Kevin has also written a serious political drama, A Legacy of One, self-published in 2016, which was short-listed for the Chanticleer Somerset Award for literary fiction. Kevin is a resident of West Windsor, New Jersey and is a graduate of Columbia College (‘83), where he was a classmate of Barack Obama, and Boston University School of Law. Readers can contact Kevin via his website at www.KevinGChapman.com.

You have subscribed to alerts for Kevin G. Chapman.

You have been added to Kevin G. Chapman's favorite list.

You can also sign-up to receive email notifications whenever Kevin G. Chapman releases a new book.