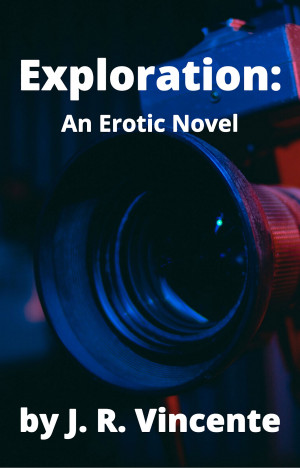 This book is written by one of my "favorite people that I've never met," J.R. Vincente, a fellow A to Z Challenge co-host. I bought a copy from Smashwords the day it came out because I enjoyed her Runaway book.

Exploration was a good book. I enjoyed that it it's set in a post-apocalyptic future. It gives the characters a different set of "rules" and "morals" to play by, and gave my mind a chance to ponder possibilities. (So many of which I hope will come up in book two.)

Mara, the main character, comes of age. Everyone takes vitamins, and those not of age have a vitamin that prevents sexual desires. So this future society has totally ended teen pregnancy, child molestation, and it seems to heavily imply they've even put a stop to non-consensual sex in all forms, including rape and forced marriages. I'd love for Mara to learn more about that, but it isn't the focus. The story is about all of her firsts, because she is assigned a job as the colony's new porn star (which she consents to). The tension comes from a guy she grew up with, a friend, who now that they're off the suppression vitamins, is interested in her. He is sent away for most of the book, and she only occasionally thinks about him. She's more focused on her career, which is having sexual firsts. They're making porn videos so others who come of age know what to expect. As of book one, what to expect is just sex. No romantic connection, no seduction, no dating and debating how long to wait between anything. Just pick a guy from a list and he shows up and they go at it, pausing only to verify consent is still given.

Mara questions if she's just a job to the two guys she has sex with in this book; in both cases, that is how it started out. She feels lucky to learn about sex from people who are very experienced. Mara also pauses to reflect for a brief moment on the fact that it would have been fun to explore with James, who equally lacked experience. She's now the experienced one, so they'll never have all of these first together. (I'd honestly like to see a book three where they make a video for the guys. And one for others, because the book does mention they have the whole range genders and the whole LGBTQIA+ experience. This could easily be an entire series with different characters taking Mara's roll. Maybe she'll become a director? Maybe we'll find out that she's the one writing this, fictional speaking, and it's a call to those looking at a career path like her own? Very exciting possibilities. I'm also pretty sure they've only offered her male partners so far, so I'm curious as to if that will change in the next book. Maybe Jean won't stay behind the scenes? I love that this books fills me with so many thoughts about what the next book could be!)

Relationships similar to marriage last for one year, after which people can stay together or not. Poly relationships also exist, as far as I can tell. I'm hoping to see more of how this works in that world. How is heartbreak dealt with? Mara questions jealousy at one point, so does that remain an issue, or is there a daily vitamin that turns that emotion off and people are given it if they enter a steady relationship? So many questions! My biggest qualm about this book is that it isn't long enough. I need more pages, more information, more about all the deeply fascinating world that J.R. has created here.

There are some plot twists, mostly thanks to Marchand. Mostly it's just a fun and entertaining read. Marchand is described as having caramel-colored skin and dark hair, so there is diversity, though the society might be advanced enough to be beyond prejudice.

The cover does match the book, as she is followed by a camera to record everything. (Mara barely has any feelings about being naked and exposed. It's a fleeting thought. But their society has different ways than most current real-life places. Jean is the shy character.) The title goes perfectly with the book. Mara starts off with a thirst for knowledge about sex, and the book ends with her still exploring and still eager to learn more, but also navigating and juggling various relationships thanks to her job.

The theme is coming-of-age and having the courage to learn about your passion. (In Mara's case, sex is her passion. Jean's passion is make-up. How much make-up people use, when, and why aren't mentioned, but Jean seems to be focused on make-up for film stars.) The plot all came together, everything progressed in a natural order.

I enjoyed the characters, but none of them relate to me specifically (which is fine, I rarely see myself represented in books of any genre). The book would probably be most loved by anyone who wants to read about a girl going through her firsts with experienced partners in a world without sexual taboo. I was especially excited about the setting and the culture of the world. Mara faces very few obstacles and her goals are mostly met quickly and easily. Having to eat a lot of cereal because she can't cook is probably the only real difficulty. There's potential for her friendship-maybe-more with James to become an obstacle in the next book. I have to wait for the next one to find out!

You have subscribed to alerts for Jayden R. Vincente.

You have been added to Jayden R. Vincente's favorite list.

You can also sign-up to receive email notifications whenever Jayden R. Vincente releases a new book.