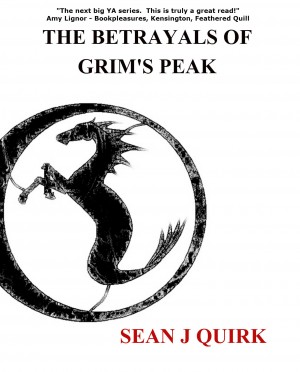 The Betrayals of Grim's Peak

By Sean Quirk
Rated 4.33/5 based on 6 reviews
A world hidden right under our noses for thousands of years. A secret dating back to its founding fathers that threatens to throw it into chaos. Its savior ... a boy from our world. More
Augustus Tomlin was found floating in the waters of the Florida Keys as an infant after a mysterious undersea explosion. Not long after turning sixteen, following an attack by creatures right out of a nightmare near his adoptive parents' seaside cabin, he is pulled away from the only family he has ever known back into the one thing that scares him the most – the ocean.

Augie reluctantly follows his new friend Mira and her drac to the centuries old underwater city of Grim's Peak where he must overcome his overwhelming phobia of water and adapt to his new surroundings quickly because it is clear that someone is hell bent on trying to kill him. The only clue he has to his origins is the small medallion he was wearing on the night he was found.

Augie's quest for the truth about who he is and what happened to his parents leads him and his friends to secret underground caverns, a dead undersea lake called the Hel-mir, and to several encounters with a dangerous species of half-human/half-fish hybrids called Mers who will seemingly stop at nothing to reclaim the territory now occupied by Grim's Peak that they say was stolen from them by the town's founders almost a thousand years ago. It isn't long before Augie discovers he is part of a centuries old mystery that began with a single lie - a lie so powerful that were it to ever be exposed it would bring everything crashing down around him including the amazing new world he has been introduced to.

Time is running out, and to uncover the truth Augie must face earth shattering revelations about his past, survive against incredible odds, and discover the identity of the traitor in his midst who has been living right under his nose all along. 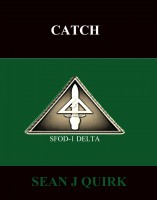 Augie, adopted by Earl and Marge after a hurricane hit the waters, was always afraid of the water. Earl and Marge had even given up using their boat to stay away from the water. But Augie realized it was not fair to Earl and Marge, so they went for a vacation at their old Florida Keys home.

While on vacation, Augie see something he has never seen before and is forced to go into the water in order to learn the truth about what he saw. What he learned was that there is a magical world beneath the surface of the water. While feeling like an outsider, he is befriended by a few select people, and the more he learns, the more he has questions. Even the elders of the underwater world are baffled by what is happening.

Who could ever imagine the world Augie discovers, and who is really telling the truth. Travel with Augie every step of his journey and meet so many characters who don’t always appear to be what they seem.

In the post-Harry Potter days, it's hard not to write a book that will sound similar to the plight of the boy wizard. As such, there are several parts of this book that sound very familiar to those who are familiar with Harry Potter. Aside from that, however, there is a lot to like about this book. First, it is an easy read. The plot moves along at a decent pace and there isn't a whole lot that is necessary that is skipped. Second, the characters are likeable. There is a little glossing over of some of them and some convenient stereotypes, but there aren't any that come off as incomplete. And third, even though this book is written so that at least one sequel is forthcoming (another nod toward HP), there is a sense of completeness to this book. That is, you don't feel cheated.

There were just a couple things that prevented me from giving this one 5 stars. First, I thought some things happened altogether too quickly. Not in terms of plot, but in terms of characters. When you read it, you'll see what I mean. There were about 3 or 4 real "leaps of faith" that happened without enough for me not to notice. Second and third are just a couple quibbles. Second is that the last dozen pages of the book are explanatory without being visionary. That is, a lot of telling and not showing. I know, rather silly and academic, but still... And third, also rather academic, is that it gets me when I see "it's" instead of "its." Just me, I know, but...

All in all, this book is a good read and I am looking forward to Part 2!

I've read some great books recently, but this one has to be right up at the top of the list of the ones I've enjoyed most. It's very well written, extremely imaginative, and captures your attention from the start, making you eager to read on and learn what will happen next. The characters are well rounded, and the worldbuilding is excellent, making it easy to imagine you're right there in Grim's Peak with Augie as he learns about the new world he's found himself in and attempts to survive.

I normally enjoy reading and reviewing YA books! Especially when they are creative and full of imagination! Reading all of my life has been a pleasure and I'm happy to share my thoughts on books for the young, hoping they'll catch that love of reading early...

The Betrayals of Grim's Peak is a title that tells you little about what is it about! So, let me say that Grim's Peak is the location of the majority of the novel...

And it is located entirely underwater, maybe somewhere near where you live!

The thing that impressed me most about the world that Quirk has created is that it is "not" magical--it is instead a creative, wonderfully designed imaginative place that "could" exist if some of us decided to move under water. Well, maybe some of the characters are fantasy, but pay attention to the accommodations for travel, the use of the local creatures of the sea harnessed to, for instance, act as taxis, and you'll realize just how much thought has been put into this wondrous world! Wouldn't it be wonderful to walk out the door of your home and automatically be in the water, ready to go wherever you wanted? And use a hippocamp (think horse) to ride!

Augie Tomlin is the main character...He was "found" by his parents along the beach near where they lived and they took him in as their son--but he was soooo much more!

But somebody knew he was there--and what he possessed! And when he was 14, they came after him! Who are they? You'll have to find out, but they are ugggggly! Fortunately, he was saved by a young girl...and her dragon... (Ok, I already told you that there was some fantasy with the characters...LOL)

Now, imagine, a boy who had never learned to swim, suddenly being taken deep underwater, to learn about his birth, his parents, and what he was to do to save Grim's Peak! And to do that, they had to discover the secrets of the past going back to the time when Hingrit Grim first came!

I loved the adventure and everything else about this book. It is definitely a book that will entice your young sons and daughters as well--after all, how many girls have a dragon (actually a drac) all their own? And wait until Augie gets to ride "Red..."

Have your children check out the site and verify their interest...But I reallllly think this is one you won't want your children to miss...don't know the official age but, say, 8-10 and up to 99 should cover those interested if they love fun, fantasy and finding themselves in deep, deep water! Highly recommended!

Step aside Dean Koontz, Stephen King and J.K Rowling make room for Sean Quirk, a creative writer whose fertile imagination appears to be on the same wave link as yours. If you are of the Harry Potter generation you will love this one. In his first fantasy, Sean Quirk leads his readers, both the young and the mature, into a colourful and entertaining perspective into what life would be at the bottom of the ocean.

The story centers around a boy named Augie who is adopted after being found floating on the ocean surface after a violent under water explosion. After fourteen years of everyday life, Augie’s adopted parents bring him back to the site where he was discovered. One day, while standing at the end of the pier and mesmerized by the churning waves he sees nightmarish creatures that follow him back to the safe haven of his parents. This encounter proves to be his first introduction to the magical world of Grim’s Peak. When his parents learn the creatures are harmless and have Augie’s safety at heart and want to protect him from a menacing force below, they agree to let their son return to a world that appears to be an important part of his past. There he discovers the secrets tying him to this world, the good and the bad, and the hidden dangers that are shadowing him.

This fantasy is highly imaginative and combines a mix of every weird creature you can think of. The author’s vivid descriptions paint a frightening and creepy atmosphere that is so visual I wouldn’t be surprise the story will have legs and turn up on a different format and maybe even the big screen someday. The story of course is nonsensical but its great plotting makes it most interesting and intriguing and its fantastic characters make the whole experience refreshing and captivating. Although I am not a die –hard fan of this genre, I nevertheless enjoyed this trip into Mr. Quirk’s world.

You have subscribed to alerts for Sean Quirk.

You have been added to Sean Quirk's favorite list.

You can also sign-up to receive email notifications whenever Sean Quirk releases a new book.