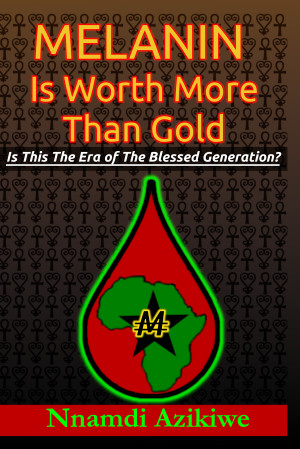 Melanin Is Worth More Than Gold

By Nnamdi Azikiwe
"Melanin is a chemical. Chemicals have a dollar value. What is the dollar value of melanin?" Those words came through loud and clearly as preparations were being made for the first Sacred Libation Ceremony. Then the answer came. Melanin was worth more than gold. This was true just in time for the 100th anniversary of the Red, Black and Green flag. Is this the era of the blessed generation? More
Not just "pigment" or "color," melanin is an aromatic bio-polymer and organic semiconductor presently worth over $380 a gram more than gold. CNN, ABC, CBS, NBC, PBS, BBC, Aljazeera, RT, BET, Ebony, JET, The New York Times or The Washington Post among other media outlets seem incapable of ever even mentioning that fact. What else is it they don't know? Is it possible a new era has begun with melanin being worth more than gold and people who claim to be the source of all knowledge missed the boat?The easily verifiable facts found in "Melanin Is Worth More Than Gold" trace the path from melanin being observed as worth more than gold, silver, platinum, palladium and rhodium combined to an undeniable conclusion: a shift in power is underway. Your guide can be only one man: Nnamdi Azikiwe. Who else knows how the lynching of 148 Black women in America revealed the mind-altering fact melanin is worth more than gold?How the connection is made between the 100th anniversary of the Red, Black and Green colors of Africans at home and abroad, melanin having a dollar value and the potential for the Afro (official currency of the African Union or United States of Africa) to be worth over 2 1⁄2 times the U.S. dollar it becomes clear "a change has come." A different perspective from the one presented elsewhere shows the boundaries of might are falling amid an awakening taking place as you read this.
Available ebook formats: epub mobi pdf lrf pdb txt html
First 20% Sample: epub mobi (Kindle) lrf more Online Reader
pdb
Price: $4.49 USD
Buy Add to Library Give as a Gift
How gifting works
Create Widget
Tags: gold people science africa worth value melanin marcus garvey rbg african redemption
About Nnamdi Azikiwe

Nnamdi Azikiwe is the author of two books "Emancipated From Mental Slavery: Selected Sayings of Marcus Garvey" and Melanin Is Worth More Than Gold: Is This The Era Of The Blessed Generation?" Unlike his namesake, Zik of Africa, he was born in Washington, D.C. Terms used to describe him include tall, nna (daddy,) brother, systems analyst, “Producer”Personified,” editor, researcher, writer, and arrogant.

He lived his early years in D.C. before relocating to Chicago, Kansas City, and Concord, North Carolina ultimately returning to the city of his birth. A graduate of the University of the District of Columbia, he has spent various amounts of time in Haiti, Mexico, Canada, the Bahamas, Ethiopia, Italy, Nigeria, Benin, Togo, South Africa and England.

He formed the Mhotep Corporation in 2003 as part of transition from information technology of the digital kind into animated motion picture production. Since then the company has expanded its offerings to include games, books, and t-shirts in addition to its online home, Keyamsha.com.

The Mhotep Corporation uses its Keyamsha The Awakening brand as a means to heighten perceptions and expand awareness. By producing content to "engage, entertain and educate" the company creates value for value relationships with its audience for mutual benefit. The name Mhotep is derived from Imhotep, architect and builder of the first pyramid in Sakkara, Kemet (so-called ancient Egypt) who was also Vizier for Pharoah Djoser.

Reviews of Melanin Is Worth More Than Gold by Nnamdi Azikiwe

You have subscribed to alerts for Nnamdi Azikiwe.

You have been added to Nnamdi Azikiwe's favorite list.

You can also sign-up to receive email notifications whenever Nnamdi Azikiwe releases a new book.