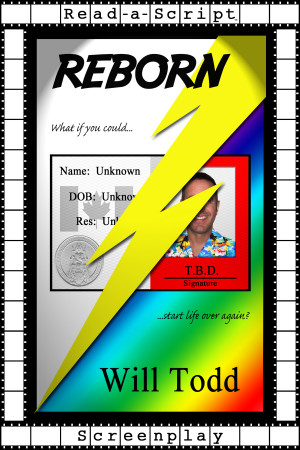 By Will Todd
What if you could start over?

What if you could wipe clean your entire past - gone - and begin a new life?

A lonely man, struck by lightning, loses all memory of the past. Or is he just using the accident as an excuse to start over?

“REBORN” is a comedy of "un-inhibition", where change in an instant can happen via a flash of lightning...

The choice is yours. More
What if you could start over?

What if you could wipe the slate clean - your entire past, gone - and begin a new life?

That's the idea behind "REBORN":

A lonely man, struck by lightning, loses all memory of the past. Or is he just using the accident as an excuse to start over?

“REBORN” is a comedy of "un-inhibition" with something to say about the choices we make in life. Its star is an ordinary man offered an extraordinary opportunity.

The real star, however, is the idea that we can all change in an instant - a flash - whether that flash be lightning...

[Note: I'm a screenwriter ("THE WONDER YEARS", "TEENAGE MUTANT NINJA TURTLES") and this story is presented in its original screenplay format. To learn more about me, or this title, please visit ToddTrumpet.com!]

1983-1985: Worked with NASA as Aerospace Engineer. Started writing scripts part-time for no money.

1988-1990: Wrote for first two seasons of "THE WONDER YEARS". Nominated for Emmy, Humanitas, and Writers Guild Awards. Won Humanitas and Writers Guild. Lost Emmy to pilot of "Murphy Brown" but I'm not bitter anymore especially since show never lived up to its potential.

1991-1992: Tried to elevate the quality of films coming out of Holywood by rejecting all script assignments and writing only on spec. I.E., Obscurity and Unemployment.

1996: Stopped running long enough to get in line to write a feature film version of "I Dream of Jeannie". BLINK! Next.

1997-1999: Completed Quest for Seven Continents with travels to Africa, Australia, South America, and Antarctica (whiter even than The Blank Page).

2000-2002: Solidified reputation as International Man of Leisure. Blew it by writing a book in here somewhere.

2010: Attempted to finance an indie movie called "WHY THE SQUIRREL WON'T FRY". Fried.

2012: Published some eScreenplays to see if anybody was interested in reading eScreenplays. Seriously, anybody. Hel-loooooooooo...?

2017: Adapted "A CHRISTMAS CODA" into a stage play. Learned Broadway and Hollywood, despite being on opposite sides of the country, actually share the same Welcome Mat.

Learn more about Will Todd

You have subscribed to alerts for Will Todd.

You have been added to Will Todd's favorite list.

You can also sign-up to receive email notifications whenever Will Todd releases a new book.