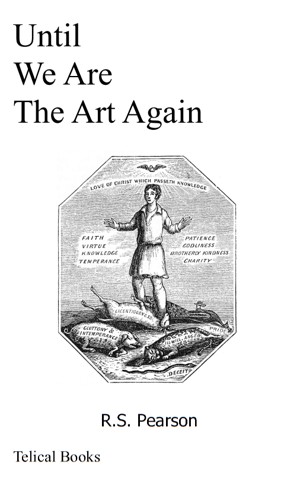 Until We Are The Art Again

Robert Scott Pearson (aka R.S. Pearson) received his BA in English composition in 1987. As early as 1986, his work was published in a New York magazine on modern art and other small press anthologies. He started ParaMind Brainstorming Software in 1992 and still runs the company to this day. ParaMind makes a configurable brainstorming program based on brainstorming by “exhausting the interactions of words coming up with every idea possible.” ParaMind has been mentioned in many books including Ray Kurzweil “The Age of Spiritual Machines.” His two recent books on hyperreligiosity and on hallucinations in religious practice key in on two of the biggest problems facing spiritual seekers today. He is finishing the third in this series on documenting the major problems that can happen to people interested in religious ideas. These three books have a cross cultural appeal since many are interested in spirituality, and others are concerned about the problems that religious beliefs can create. This book is tentatively called “Grandiosity and the Empowerment of the Spiritual and Artistic.”

Reviews of Until We Are The Art Again by Robert Pearson

You have subscribed to alerts for Robert Pearson.

You have been added to Robert Pearson's favorite list.

You can also sign-up to receive email notifications whenever Robert Pearson releases a new book.