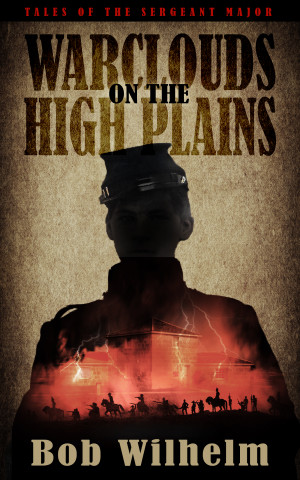 Warclouds on the High Plains

By Robert Wilhelm
The Smoky Hill Trail was the shortest route from eastern Kansas to Denver, Colorado in 1867. It was 500 miles of surprise snowstorms, choking dust, drenching rain, oppressive heat, and bloody conflict between Native Americans and soldiers from Fort Hays, Kansas. It was a dangerous time and the trail was marked by blood-soaked wagon tracks, and stories of legend. Based on actual events More
The quickest way to get from eastern Kansas to Denver in 1867, was The Smoky Hill Trail. It was 500 miles of open prairie where stage coaches and freight wagons could be high and dry one day and swimming in mud the next. Five hundred miles of surprise snowstorms, oppressive heat, violent thunderstorms, choking dust, and if Mother Nature’s threats weren’t enough, there were vast herds of bison covering a land that was the ancestral home Cheyennes and Arapahoes bent on securing their native homeland from the invading whites. Soldiers of the U.S. Army at Fort Hays, Kansas, were the only protection for freighters, stagecoach passengers, and gold seekers looking for a new way of life in the mineral-rich Rocky Mountains. It was a dangerous time and the Smoky Hill Trail was marked by anonymous graves, blood-soaked wagon tracks, and stories of legend. The book centers on Fort Hays, a sprawling military post in northwest Kansas, and Sergeant Major Thomas Barrett, the senior ranking enlisted man in the 18th U.S. Infantry Regiment in 1888. It is through his eyes and memories that the reader will be transported back to the dangerous, exciting, and memorable times when the Smoky Hill Trail was travelled by the brave-hearted European immigrants and equally brave-hearted Native Americans. “War Clouds on the High Plains” is the first in a series of books chronicling the “Tales of the Sergeant Major.”
Available ebook formats: epub
Price: $1.99 USD
Buy Add to Library Give as a Gift
How gifting works
Create Widget
Tags: us military flash flood libbie custer army infantry indian warfare westward trail cheyennes general custer western kansas frontier war
About Robert Wilhelm

Bob Wilhelm was born in 1950. His father was a school teacher and administrator in several small towns in Kansas where Bob, his two older brothers, and two younger sisters grew up, living the “Mayberry” experience. Bob has had a life-long interest in the “wild west” and grew up watching Roy Rogers, the Lone Ranger, and Gene Autry on Saturday mornings. Following a stint in the U.S. Air Force, where he attained the rank of sergeant, he attended Fort Hays State University in Hays, Kansas, where his primary field of study was biology (another keen interest). After graduating with a Master’s Degree in biology, he sought work as a museum director. As fate would have it, Natural History Museum jobs were practically non-existent. People get into those jobs because they have a passion for the job, not for the money, so jobs only open up when someone retires or dies!. However, a position at Fort Hays Historic Site became available, and he decided to take it while continuing to seek employment in natural history. Twenty-nine years later, Bob retired from the Fort Hays history museum. He had always wanted to write fiction, and so, immediately upon his retirement, he began writing his series “Tales of the Sergeant Major.” This is his first historical novel set in the military world of Fort Hays in the late 1800s. He plans to write a tetralogy following the exploits of Sergeant Major Barrett, and the five troublesome privates of the 18th Infantry, but, as he is fond of saying, “You never know where the characters will take you.” Bob lives in Hays, Kansas, with his wife, Joan.

About the Series: Tales of the Sergeant Major

These historical novels involve Fort Hays, Kansas, an active and important military post that was active from 1865 until 1889. In this series, Sergeant Major Thomas Barrett takes on the unusual chore of training five recruits that are about to get discharged from the Army. In order to make them better soldiers, he begins telling them stories of the people and events that surrounded Fort Hays. The first book begins with the Smoky Hill Trail, a stage and freight road from Kansas City to Denver, a trail known as the Starvation Trail; the construction of the Kansas Pacific Railway (now the Union Pacific Railroad) that followed the Smoky Hill Trail; and tells of the frightening experience of Elizabeth Custer (wife of the famous General) during a violent and deadly storm on the plains. The second book in the series tells of the early days of Fort Hays and the important but little-known Battle of the Saline River, in which the newly formed 10th U.S. Cavalry (who earned the name "The Buffalo Soldiers") met a determined band of Cheyenne warriors, as well as the exciting story of a military doctor who had a close-up encounter with a mountain lion (and other predators) on the plains.

Also in Series: Tales of the Sergeant Major

Reviews of Warclouds on the High Plains by Robert Wilhelm

You have subscribed to Smashwords Alerts new release notifications for Robert Wilhelm.

You have been added to Robert Wilhelm's favorite list.

You can also sign-up to receive email notifications whenever Robert Wilhelm releases a new book.