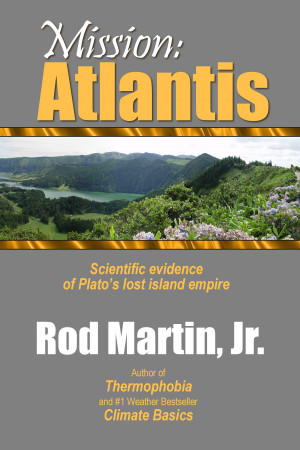 By Rod Martin, Jr
Scientists go crazy facing controversy. James Gleick said, “Shallow ideas can be assimilated; ideas that require people to reorganize their picture of the world provoke hostility.” Guess what? Scientists’ heads are going to explode. For one, we have 3 pieces of evidence of an Atlantis-like event occurring right when Plato said Atlantis was destroyed. This could be our “smoking gun.” More
Why would scientists ignore evidence?

Some scientists occasionally ignore evidence—and sometimes violently. Why would they do this? American journalist and bestselling author,James Gleick explained it this way: “Shallow ideas can be assimilated; ideas that require people to reorganize their picture of the world provoke hostility.”

When scientists refuse to look because they “know better,” others can swoop in to make the big discoveries. That happened when English amateur, Frank Calvert, discovered Troy at Hisarlik, Turkey (Schliemann came later).

Ironically, the same arrogance that had blinded the experts still persists today.

But Atlantis? Yes, we have evidence. Lots of it. Not yet enough to prove Plato’s lost island empire existed, but some compelling—even startling—evidence, including 3bits of scientific fact that tell us something truly earth shattering happened right when Plato said Atlantis was destroyed.

• Dramatic change in climate worldwide, 33x as fast as the UN IPCC’s feared warming of the 21st century.
• A massive volcanic eruption.
• A sudden drop in sea level worldwide of between 2 and 7.4 meters.
• All happening 9620 BC—a virtual bullseye for the tectonic collapse of Atlantis.

For decades, “Clovis First” was sacred dogma in North American anthropology. Experts warned scientists not to dig below the Clovis horizon. If a scientist dared betray Clovis, they could lose funding or even their careers. But this isn’t science. This is politics and egoism. And how can dogma in science be overturned if no one looks for evidence?

Sadly, this behavior is all too common in science. Stray too far from what is popular and you could be scrambling to learn a new career.

Even first-year geology students know that mountains frequently form at tectonic plate boundaries from subduction and magmatic arcs, or from convergent compression when there are impediments to subduction, as with the continental “bone” of India colliding with the Eurasia. When such mountains form in the ocean, they sometimes become islands. And the region Plato picked for Atlantis is along a tectonic plate boundary.

In the case of the northeast Atlantic, we have the Azores underwater mesa—a huge plateau rising above the ocean bottom, upon which the entire Azores archipelago sits. We have the indistinct nature of the Azores-Gibraltar tectonic plate margins which have puzzled geologist for decades. We also have proof that the Africa plate movement with respect to the Eurasia suddenly changed 36 Mya, leading to the formation of the ultra-slow spreading center—the Terceira Ridge, right next to the Mid-Atlantic Ridge. All of these facts, and more, attest to some unusual geological actions that could have been involved in the formation, the growth and the ultimate destruction of Plato’s lost island.

Taking evidence from geology, oceanography, linguistics, genetics, biology, anthropology (both physical and cultural), and paleoclimate, Rod Martin has gathered a compelling set of facts that suggests very strongly that scientists and skeptics have been too hasty in dismissing Atlantis.

The highly acclaimed work of L. Sprague de Camp on Atlantis was reexamined thoroughly and found to be riddled with logical fallacies. That his 1954 work could be held as a “monument to scholarship” only shows the shoddy state of critical thinking when it comes to a controversial topic like Atlantis.

Martin emphasizes again and again, in his book, that we still have no direct proof of Atlantis itself. Like a true scientist, he uses precision restraint from jumping to the easiest or most obvious conclusions on the facts either for or against the past reality of Plato’s lost island.

About the Series: Mission: Atlantis

Evidence exists which supports Plato's story. There is lots of it. This series provides the reader not only with evidence, but logic and reasoning to understand that evidence and its context in the real world.

The Mission: Atlantis series provides the reader with all the tools to investigate this fascinating possibility with greater rigor. In doing so, the hope is that all of science will be improved in the process.

You have subscribed to alerts for Rod Martin, Jr.